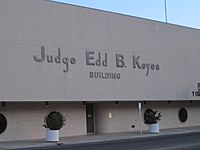 Judge Edd B. Keyes Annex Building across from the Tom Green County Courthouse

Tom Green County is a county located on the Edwards Plateau in the U.S. state of Texas. As of the 2010 census, its population was 110,224. Its county seat is San Angelo. The county was created in 1874 and organized the following year.

The county was established by the state legislature on March 13, 1874, and named after Thomas Green, a Confederate brigadier general. It originally comprised an area over 60,000 square miles (160,000 km2).

The original county seat was the town of Ben Ficklin. In 1882, flood waters of the Concho River destroyed the town and drowned 65 people. The county seat was moved to San(ta) Angela. In 1883, the town's name was officially changed to San Angelo by the United States Post Office.

Tom Green County has an unusual shape, with a long, narrow strip of land extending to the west. This feature is because Reagan County to the west used to be part of Tom Green County, and the state of Texas required that all counties have a contiguous land route to their county seat. Therefore, the small strip of land served to connect the two main regions. In 1903, the residents of the western section voted to form their own county (Reagan County), while in the same vote it was decided that the connecting strip would remain as part of Tom Green County. 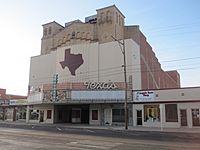 All content from Kiddle encyclopedia articles (including the article images and facts) can be freely used under Attribution-ShareAlike license, unless stated otherwise. Cite this article:
Tom Green County, Texas Facts for Kids. Kiddle Encyclopedia.