Tropical Storm Erin was the second tropical cyclone to make landfall on the United States in the 2007 Atlantic hurricane season. It was also the fifth named storm of the season. Erin formed in the Gulf of Mexico on August 14 from an area of convection which was becoming stronger. It became stronger and changed into a tropical storm the next day, and on August 16 Erin made landfall near Lamar, Texas and was able to not die as it moved over land across Texas before moving towards the north into Oklahoma. The storm killed at least 17 people and made an already-severe flooding problem in Texas even worse. Another different storm that Erin went into killed at least 18 people. 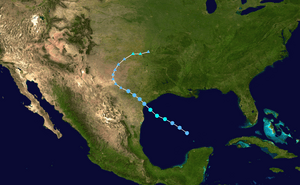 On August 9, an area of convection formed just south of Jamaica in association with a trough of low pressure. The system moved west-northwestward, and by August 10, the system had a broad surface trough with a little shower activity. Convection increased on August 11, and by August 12 the contact between a tropical wave and an upper-level low in the area resulted in a large area of disorganized thunderstorms extending from the western Caribbean Sea into the central Bahamas. Upper-level winds slowly became more helpful for development, and on August 13 a large low pressure area formed about 90 miles (145 km) north-northeast of Cancún, Quintana Roo. Late on August 14, a NOAA Hurricane Hunters plane that flew into the system reported a small circulation center, but at the time was not well-defined enough to begin tropical cyclone advisories. However, deep convection was kept near the increasingly organizaing center, and at 0300 UTC on August 15 the National Hurricane Center named it as Tropical Depression Five about 425 miles (685 km) southeast of Brownsville, Texas.

In the overnight hours after formation, the storm was disorganized with a shabby and abstracted center of circulation. Located to the south of a mid to upper-level ridge over the southern United States, the system moved to the west-northwest into an area ideal for further strengthening; an upper-level anticyclone formed over the central Gulf of Mexico, and sea surface temperatures along its track were warm. The cloud pattern became better organized, keeping a large area of convection with curved rainbands and well-established outflow. Based on reports from Hurricane Hunters, the National Hurricane Center upgraded the depression to Tropical Storm Erin at 1530 UTC on August 13 about 250 miles (400 km) east of Brownsville, Texas. As it continued northwestward, Erin remained disorganized and was not able to strengthen above minimal tropical storm status. At 1200 UTC on August 16 the cyclone made landfall near Lamar, Texas as it weakened to tropical depression status. Three hours later, the National Hurricane Center stopped giving out advisories on Erin as warning responsibility was switched to the Hydrometeorological Prediction Center.

Tropical Depression Erin over central Oklahoma, with what appears to be an eye-like structure.

Slowly moving northwestward through Texas, Tropical Depression Erin managed to keep an area of convection near the center, with its widespread, but scattered rainbands dropping moderate to heavy precipitation. By August 17, the winds decreased to 20 mph (30 km/h), with higher gusts. The system turned to the north-northeast on August 18, while heavy bands of thunderstorms continued to spin around the center of Erin. Early on August 19 after entering Oklahoma, Erin suddenly re-intensified to maximum sustained winds of 50 mph (80 km/h) a short distance west of Oklahoma City. The Norman, Oklahoma National Weather Service remarked the intensification "[resulted] in what amounts to an inland tropical storm;" at 0930 UTC the system showed an eye-like feature and a spiral rainband, and produced wind gusts of over 80 mph (130 km/h). However, a few hours later, the system began weakening again, and late on August 19 Erin degenerated into a remnant low pressure area as the circulation dissipated over northeastern Oklahoma. The low continued into southeastern Kansas before dissipating, feeding moisture northward toward a frontal system extending from the Midwestern United States through the Mid-Atlantic States. Its remnant mid-level circulation then moved eastward across Missouri, Kentucky, and Virginia before losing identity as it moved out into the Atlantic Ocean.

Governor of Texas, Rick Perry activated the National Guard and moved emergency personnel to the areas expected to be affected by the storm. Erin is expected to bring flooding to the region, which had already been declared a disaster area on August 7, 2007 from widespread flooding on the Nueces River basin; this area remained flooded as of August 15, 2007. On August 15, oil futures rose to $74.01 (USD), because of fears of Erin disturbing oil supplies produced on Texan coasts, combined with low oil supplies. As a result of the threat from the storm, Shell Oil Company evacuated 188 workers on oil platforms in the northwestern Gulf of Mexico.

By midday on August 15, rainbands with gusty winds began affecting the Texas coastline. As it made landfall, the storm created heavy rainfall near and to the or northeast of its path, reaching 11.02 inches (280 mm) at a station in Lockwood. The passage of the storm caused several bayous in the Houston area to reach or go beyond flood levels. Across southeastern Texas, the cyclone generated several funnel clouds, and near Iah a EF0 tornado was reported. Wind gusts from Erin were fairly weak across the state, peaking at 35 mph (55 km/h) at Palacios with an unofficial report of 39 mph (63 km/h) at Jamaica Beach. While moving onto land, the storm produced a small storm surge peaking at 3.22 feet (0.98 m) at Pleasure Pier, which caused minor beach erosion.

In Clear Lake City, heavy rainfall broke down a part of a grocery store roof, killing two workers. The precipitation caused moderate flooding across eastern parts of Harris County; over 400 homes and 40 businesses were flooded. Flooding across the Greater Houston area briefly stopped the METRORail and closed several state roads. One person drowned after driving into a retention pond. Several people needed rescue assistance, and in Comal County a car accident killed three people. The movement of the storm temporarily left about 20,000 electrical customers without power, though most outages were quickly restored. In San Antonio, one body was found from a creek and another died after driving into a flooded road and was swept into a drainage ditch in which four others survived. In Sisterdale, two people were killed when they were swept away stalled over Sister Creek In Taylor County, near Abilene, flooding killed one person and forced the evacuation of about 2,000 people.

After its unexpected redevelopment over Oklahoma, heavy damages were also reported there. Several communities in central Oklahoma were flooded from the effects of heavy rainfall. Watonga, Kingfisher and Geary were the hardest-hit communities, where many houses and buildings were flooded. Winds in Watonga gusted as high as 82 mph (131 km/h), which damaged numerous trees and power lines and heavily damaged mobile homes. The entire community lost power, also with about 15,000 customers in total in the Oklahoma City metropolitan area. A section of Interstate 40 was also closed for a while.

One person was found to have drowned in a cellar in Fort Cobb, and another drowned in Kingfisher. Another storm-related death took place in Seminole. Three others were found dead after a weather-related automobile accident also near Carnegie. Another automobile accident-related death took place in Okmulgee County but it is not sure if Erin is to blame there.

Although its surface circulation had dissipated, its upper circulation remained unbroken and created a burst of rainfall early on August 20. The 11.94 inches/303.3 mm that fell at Miller became the wettest Missouri rainfall total associated with a tropical cyclone, or its remains, since at least 1976. One person died in Sleeper when he drove into flood waters which had swept away a bridge he was trying to navigate onto. Nine water rescues happened along the Interstate 44 passageway, which was most effected by Erin's rainfall.

All content from Kiddle encyclopedia articles (including the article images and facts) can be freely used under Attribution-ShareAlike license, unless stated otherwise. Cite this article:
Tropical Storm Erin (2007) Facts for Kids. Kiddle Encyclopedia.