Tropical Storm Chantal was a very short-lived storm in the northern Atlantic Ocean that stayed away from land during most of its existence. It was also the third named storm of the 2007 Atlantic hurricane season. The stormed formed from a non-tropical system between Bermuda on Cape Cod, Massachusetts that developed on July 31 with good conditions for further development. The storm had maximum sustained winds of 50 mph (80 km/h) and began to move quickly northeastwards into colder water temperatures. When convection began to decrease, the National Hurricane Center stopped sending out advisories on August 1 when Chantal began to turn into an extratropical cyclone. Later, the remnants moved over southeast Newfoundland, before moving into the Arctic Ocean. 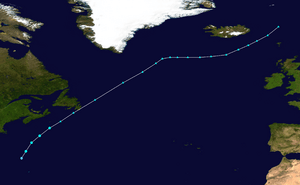 An area of thunderstorm activity developed on July 28 about 100 miles (160 km) east of the Bahamas which was associated with a weak low pressure system. It moved north-northeastward, into poor environmental conditions which left the system disorganized. However, conditions then were forecasted to become better for development, and by July 29 the National Hurricane Center stated that it had "potential for tropical or subtropical development." On July 30, the low passed to the west of Bermuda as it continued moving northeastward, under the effects of a large mid-latitude trough. The system contained an exposed low-level circulation, which from time to time passed under a thick area of convection to its northeast. By early on July 31, ship reports and QuikSCAT observations detected winds of 35 mph (55 km/h), and the center was well-involved enough with the convection for the National Hurricane Center to name it as Tropical Depression Three while it was located about 270 miles (435 km) north-northwest of Bermuda, or about 445 miles (710 km) south-southeast of Chatham, Massachusetts.

By six hours after development, the depression had of a somewhat exposed low-level center with deep convection taking up most of the northeastern semicircle. Located over sea surface temperatures of about 80º F (27º C), one forecaster said the depression had "a small window of opportunity... for it to reach tropical storm strength before transitioning to an extratropical cyclone." The system organized further, and based on satellite pictures and QuikSCAT data, the National Hurricane Center upgraded the depression to Tropical Storm Chantal at 1215 UTC on July 31 while located about 330 miles (530 km) south of Halifax, Nova Scotia. By three hours later the system formed a well-defined curved banding features, and Chantal reached maximum systained winds of 50 mph (80 km/h) at 40.2º N. The storm speed up northeastward into an area of cold waters and cooler air, and early on August 1 the National Hurricane Center gave out its last advisory on Chantal as it began extratropical transition.

After becoming an extratropical cyclone, Chantal managed to keep scattered convection near its center, though its main area of convection and clouds moved to its north. On August 1, the cyclone made landfall on Newfoundland along the Avalon Peninsula, and by late in the day the extratropical remnants of Chantal were about 265 miles (425 km) northeast of St. John's, Newfoundland and Labrador and moving northeastward at 44 mph (70 km/h).

The weather system that would later become Chantal began to affect Bermuda on July 30. It caused some thunderstorms. The next day, it caused heavy rainfall that reached r2.12 inches (53.8 mm) at the Bermuda International Airport. Winds on the island reached 45 mph (72 km/h) because of the weather system. After Chantal passed Bermuda, a ship with the call sign of C60Y4 recorded winds of 37 mph (59 km/h).

Shortly after the system became a tropical storm, the Atlantic Storm Prediction Center of Canada sent out gale warnings for the waters off of Newfoundland. The Newfoundland Labrador Weather Office also issued warnings for heavy rain.

In the open ocean, waves from Chantal reached 20 feet (6 m) high. The storm also had effects on land. A wind gust of 54 mph (88 km/h) was reported. What was left of Chantal caused heavy rainfall in a short time in Newfoundland. In the province, rainfall peaked at 5.9 inches (150 mm) at Whitbourne. The rainfall caused flooding and also caused streets to wash out in several cities on the Avalon Peninsula. Several towns declared states of emergencies along the Avalon Peninsula.

All content from Kiddle encyclopedia articles (including the article images and facts) can be freely used under Attribution-ShareAlike license, unless stated otherwise. Cite this article:
Tropical Storm Chantal (2007) Facts for Kids. Kiddle Encyclopedia.