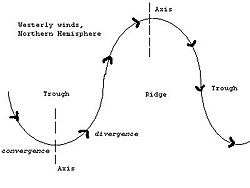 Representation of alternating troughs and ridges in upper-level Westerlies for the Northern Hemisphere, with regions of convergence and divergence labeled.

A trough is an elongated area of comparatively low atmospheric pressure, usually in association with weather fronts.

Convective cells may form in the surrounding area of troughs and give birth to a tropical cyclone. Some tropical or subtropical areas, such as the Philippines or south China are greatly affected by convection cells along a trough. In the mid-latitude westerlies, troughs and ridges often exchange with each other, especially when upper-level winds are in a high-amplitude pattern. For a trough in the westerlies, the region just west of the trough axis is typically an area of convergent winds and descending air - and hence high pressure - while the region just east of the trough axis is an area of fast, divergent winds and low pressure. Tropical waves are a type of trough in easterly currents, a cyclonic northward deflection of the trade winds.

All content from Kiddle encyclopedia articles (including the article images and facts) can be freely used under Attribution-ShareAlike license, unless stated otherwise. Cite this article:
Trough (meteorology) Facts for Kids. Kiddle Encyclopedia.