Tropical Depression Ten was a short-lived tropical cyclone that moved onto land on western Florida in September 2007. It was the tenth tropical cyclone of the 2007 Atlantic hurricane season. The storm formed as a subtropical depression on September 21 in the northeastern Gulf of Mexico from the contact of a tropical wave, the end of a cold front, and a low pressure system. Originally, the system had a disorganized circulation and thunderstorm patterns, but later turned into a tropical depression after convection became more organized over the center. Moving northwestward, the depression came onto land near Fort Walton Beach early on September 22, and shortly later, it dissipated over southeastern Alabama. The depression caused only light damages to the area and was limited to light rainfall, although the system that would later become Tropical Depression 10 created a damaging tornado in Eustis, Florida. 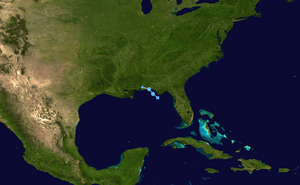 By September 17, the contact between a tropical wave and the end of a cold front created huge amounts of thunderstorms over the Bahamas and western Atlantic Ocean. An upper-level low over western Florida created more convection across the area, and on September 18 the system began moving towards Florida. Originally, the system was very disorganized, but surface pressures slowly went down across the area, with a weak low pressure area forming on September 19. A Hurricane Hunters aircraft was sent to fly into the system on September 20 reported an organized low and strong wind gusts in the storm as it moved into the northeastern Gulf of Mexico, along with little and disorganized thunderstorm activity. Convection slowly became better organized, with a well-defined rainband in its eastern half and irregular thunderstorm activity near the center. In spite of its bad organization, with a disorganized circulation and an upper-level low aloft, the National Hurricane Center started advisories on Subtropical Depression Ten at 1500 UTC on September 21 while it was located about 40 miles (60 km) south of St. Vincent Island, Florida, stating "the potential for additional development right along the coastline."

With a mid-level ridge to its northwest, the subtropical depression was predicted to move alongside with the coastline of Florida and Alabama. As an outcome, the cyclone was forecasted to have winds of 45 mph (75 km/h) and move onto land on southern Mississippi. The circulation became better organized as convection modestly increased over the center, and within 6 hours of its formation, the system turned into a tropical depression. The cyclone continued moving northwestward, making landfall around 0000 UTC on September 22 near Fort Walton Beach, Florida with winds of 35 mph (55 km/h). The cloud pattern began to become disorganized as it moved inland, and 3 hours after it moved ashore the National Hurricane Center gave out its last advisory on the depression. As the depression continued into Alabama, it became more disorganized, and by 0900 UTC on September 22 the cyclone collapsed into a remnant low pressure area. 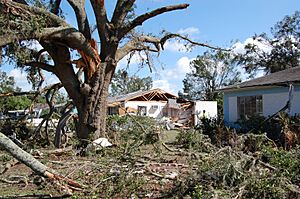 At the same time the National Hurricane Center gave out its first advisory on the depression, they also gave out a tropical storm warning from Apalachicola, Florida to the delta of the Mississippi River. Shortly thereafter, an inland tropical storm warning was given out for Pearl River, Walthall, and Pike counties in Mississippi and Washington Parish in Louisiana. Also, the New Orleans National Weather Service gave out a coastal flood watch for four parishes in southeastern Louisiana. In Mississippi, Governor Haley Barbour declared a state of emergency. Officials ordered a mandatory evacuation for people living in areas of low lands and in mobile homes for Jackson, Harrison, and Hancock counties. Officials in New Orleans opened three emergency shelters, stating the possible need of shelter for citizens in about 17,000 FEMA trailers after Hurricane Katrina. Because of the threat of the cyclone, Louisiana governor Kathleen Blanco also declared a state of emergency and placed the state's National Guard and other disaster services on stand-by.

Before of the depression's development, several oil and gas companies removed unneeded workers from offshore oil platforms in the northern Gulf of Mexico; the Shell Oil Company evacuated about 700 employees, while Noble Energy removed its workforce of about 300 people from two oil rigs. Exxon Mobil stopped its production by about 1,000 barrels of oil and 55,000 ft³ (1,500 m³). With 27.7% of the daily crude oil production stopped because of the depression, oil prices rose higher after days of increasing levels, and on September 20 reached a record rate of over $84 per barrel.

Together, the wind shear and low-level helicity created moderate convection across central Florida associated with the precursor low pressure system. Late on September 20, a supercell formed near Lake Apopka, and moved quickly northward it created an EF1 tornado near Eustis; the tornado moved around for about 2 miles (3 km) and reached winds of about 100 mph (160 km/h). The tornado destroyed 20 homes, left 30 others severely damaged, and injured one person, and cut power for about 300 people. The depression also created waves of about 5 feet (1.5 m) and rip currents along the west coast of Florida. Outer rainbands began affecting coastal sections of western Florida by about 12 hours before the formation of the depression. Precipitation in the state reached 2.83 inches (71.9 mm) in Crestview. In other places, rainfall totals reached 1.46 inches (37.1 mm) in Albany, Georgia and 0.51 inches (13 mm) in Dothan, Alabama.

All content from Kiddle encyclopedia articles (including the article images and facts) can be freely used under Attribution-ShareAlike license, unless stated otherwise. Cite this article:
Tropical Depression Ten (2007) Facts for Kids. Kiddle Encyclopedia.