Hurricane Lorenzo was the twelfth named storm and fourth hurricane of the 2007 Atlantic hurricane season. It formed in the Bay of Campeche off the east coast of Mexico where it quickly strengthened into a hurricane. It made landfall in central Mexico early on September 28 as a Category 1 hurricane. 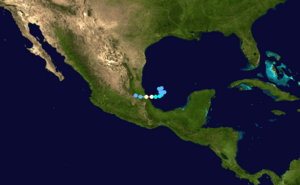 On September 21, an area of convection formed in the western Caribbean Sea associated with a trough of low pressure. Convection increased and a wide area of low pressure formed on September 22 as the convection moved northwestward towards the Yucatan Peninsula. On September 23 the area of low pressure moved over the Yucatan Peninsula and was creating thunderstorms from the southern Gulf of Mexico to the northwestern Caribbean Sea. Over the next few days the large area of low pressure was moving unevenly over the southwestern Gulf of Mexico, but convection was restricted from strong upper-level winds. By September 25 upper-level winds started decrease as conditions became more favorable for tropical cyclone formation and by that morning visible satellite imagery showed that a tropical depression could be forming about 180 mi (290 km) east of Tampico, Tamaulipas.

A tropical storm warning was given out for the central Mexican Gulf Coast on September 26. When Lorenzo began to rapidly strengthen, the warning was raised to a hurricane warning. Mexico's Civilian Protection officials declared a "red alert" for much of the state of Veracruz.

At first, no evacuations were given out right away, as a result of the up-coming start of Lorenzo, although shelters were set up in the state of Veracruz and officials cancelled classes at all local schools. Because of the fast development of the storm though, officials quickly evacuated over 100,000 people just before landfall by using bullhorns on the streets warning people of the up-coming threat.

Pemex oil production continued in spite of the threat of the system and its offshore impacts. Nonetheless, the price of oil increased to record highs of $83.90 a barrel from the concerns by investors about possible damage.

Moderate damage was reported in east-central Mexico as Lorenzo hit the area. Shacks were badly damaged by the strong winds, a lot of tree damage was reported and many areas lost electricity service. Flooding was also reported as rivers quickly rose from the heavy rain and wet ground. Scattered landslides were also reported. The area was already cleaning up after Hurricane Dean, which hit the area in late August.

Heavy rain was the cause to at least five deaths; which included a woman and two children in Chiconcuautla in Puebla's Sierra Norte region, and a senior citizen who fell into a hole near his home in Pánuco, Veracruz.

All content from Kiddle encyclopedia articles (including the article images and facts) can be freely used under Attribution-ShareAlike license, unless stated otherwise. Cite this article:
Hurricane Lorenzo (2007) Facts for Kids. Kiddle Encyclopedia.