Tropical Storm Barry is a tropical cyclone that grew quickly. It made landfall on Florida in early June 2007. It was the second Atlantic named storm of the 2007 Atlantic hurricane season. Barry formed in the Gulf of Mexico and moved toward the northeast, reaching top wind speeds of 60 mph (95 km/h). It then weakened and first reached land near Tampa Bay, Florida. Barry quickly weakened after wind shear blew away most of the thunderstorms. Barry moved up the East Coast of the United States and by June 5, it was taken over by a bigger storm.

Rain from Barry in the Cuban province of Pinar del Río hurt three people and damaged 55 houses. In Florida, Barry caused heavy rain in an area that had been in drought. Flooding and wet roads killed two people in traffic accidents. Rough seas killed one surfer in Pinellas County, Florida. In Florida and Georgia, the rain helped firefighters fight bad wildfires. Damage from the storm was minor. 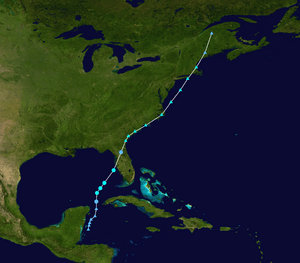 The depression developed an area of squalls (sudden, violent storms with wind and rain). A Hurricane Hunters airplane flew into the area to collect information about the cyclone. At the beginning, the tropical depression looked to be both a tropical and subtropical cyclone. On June 1, the National Hurricane Center named the storm Tropical Storm Barry. Barry was now 235 miles (375 km) to the west of Key West, Florida. Barry moved quickly towards the north. On June 2, it reached its strongest with winds of 60 mph (95 km/h).

After Barry reached its highest strength, strong wind shear removed most of the thunderstorms from the tropical cyclone. The center of the system then increased in length, and it began to weaken. At 1400 UTC on June 2, Barry made landfall near Tampa, Florida while it was at tropical depression status. As Barry moved inland, it weakened more. Later that day, the National Hurricane Center said that Barry had died out over northeastern Florida. What was left of Barry continued to move northeast. On June 3, it moved onto shore again, this time in South Carolina. Late on June 4, the extratropical system entered New England. Late on June 5, what was left of the cyclone was taken over by a larger weather system, near the border of the U.S. state of Maine and the Canadian province of Quebec.

A map showing the rain from Barry

When Barry was named as a tropical storm, the National Hurricane Center sent out a tropical storm warning for the west coast of Florida from Bonita Beach through Keaton Beach. Also, a tropical storm watch was issued from Keaton Beach, northward to Saint Marks. An inland tropical storm warning was also sent out for inland parts of Charlotte, Citrus, DeSoto, Hardee, Hernando, Highlands, Lee, Levy, Manatee, Pasco, Pinellas, Polk, Sarasota, and Sumter counties. The storm increased the risk of rip currents, so officials told swimmers to stay out of the water until the storm left the area. A tornado watch was sent out for the southern part of the state, but it was removed after the storm lost strength.

Barry caused heavy rain in Florida, the most rain being 6.99 inches (178 mm) at Palm Beach International Airport. Other areas reported over 3 inches (75 mm) of rain. The rain helped to get rid of drought conditions. It also helped in fighting bad wildfires across the state. In Brevard County, the rain caused a large sinkhole, a hole in the ground, to open in the middle of a road. Other roads were flooded. On Interstate 95, near Lake Worth, another sinkhole closed two lanes of traffic. Wet slippery roads caused many traffic accidents in the state. In Brevard and Volusia counties, drivers were killed in traffic accidents. On Interstate 4, a tractor trailer crashed into a guardrail because of the weather.

The storm caused stormy seas along the coastline of Florida, with a storm surge of 4.78 feet (1.46 m) at Clearwater Beach. The waves caused minor beach erosion. The high surge also caused minor flooding on many roads near Tampa Bay. At Indian Shores, a woman died after being injured by the high seas.

Barry caused high winds in Florida, which reached 47 mph (76 km/h), near the southeastern coastline of the state. The winds knocked down trees and caused power failures. In Carrolwood, one person was injured when a tree crashed onto their house. The storm created at least two tornadoes, including some that damaged fences and power lines. One possible tornado in Goulds, Florida left about 2,000 people without power.

Rest of the country

The storm also caused heavy rain in Georgia of up to 8 inches (203 mm). The rain helped put out wildfires. It also caused some minor flooding, and in Savannah, there were a few minor car accidents. Winds blew down some trees and power lines. Heavy rain from the storm moved across much of the East Coast of the United States. High winds also occurred in South Carolina.

The remains of Barry caused strong winds along the Atlantic coast. They reached 60 mph (97 km/h) near Charleston, South Carolina. Around 200 houses in Craven County, North Carolina lost power. In southeastern Virginia, the storm caused over 60 traffic accidents. Ten people were injured in them. High seas off Cape Fear left a sailboat with three people needing rescue from the Coast Guard. 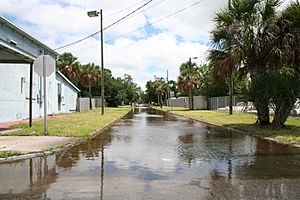 All content from Kiddle encyclopedia articles (including the article images and facts) can be freely used under Attribution-ShareAlike license, unless stated otherwise. Cite this article:
Tropical Storm Barry (2007) Facts for Kids. Kiddle Encyclopedia.