Tropical Storm Jerry was the tenth named storm of the 2007 Atlantic hurricane season. It was a very short-lived storm over the north-central Atlantic Ocean. The storm lasted less than 48 hours, half of that time as a subtropical cyclone. It was never a threat to land. 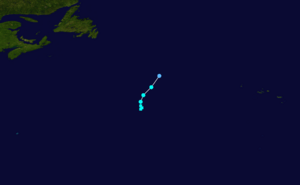 The system that would later become Tropical Storm Jerry started as a non-tropical low pressure area over the central Atlantic Ocean on September 21. The system moved in a shaky path over the north-central Atlantic over the next two days. It slowly developed deeper convection and became more organized. On September 22, the system had become organized enough that the National Hurricane Center mentioned a possible tropical or subtropical development in the area. Late that evening, it had been determined that a subtropical depression had formed, as a warm core had developed but the system was still involved with an upper-level low and had its strongest winds well removed from the center. Early on September 23, both satellite estimates and QuikScat data determined that the depression had strengthened into Subtropical Storm Jerry, despite the lack of a well-defined inner core. The storm slowly acquired tropical characteristics including a better-defined warm core, and became fully tropical that evening as a weak and sheared tropical storm with 40 mph (65 km/h) winds over a small radius.

Jerry began to weaken once again early on September 24 as it accelerated northeastward over cooler waters with sea surface temperatures below 24°C (75°F). It remained a tropical storm until later that morning.Then it weakened to a tropical depression ahead of a powerful cold front with little deep convection remaining in the system. Jerry remained a tropical depression as the cold front approached and began to absorb the system that afternoon as it continued to accelerate northeastward. That evening, a QuikScat pass determined that Jerry had opened up into a trough which was being absorbed into the larger frontal system. It completely dissipated by early on September 25.

Jerry never came near land during its lifespan, and no damage or deaths were reported. No ships were impacted by Jerry.

All content from Kiddle encyclopedia articles (including the article images and facts) can be freely used under Attribution-ShareAlike license, unless stated otherwise. Cite this article:
Tropical Storm Jerry (2007) Facts for Kids. Kiddle Encyclopedia.