Subtropical Storm Andrea was the first named storm and first subtropical cyclone of the 2007 Atlantic hurricane season. It was made on May 9; three weeks earlier than when the 2007 season was supposed to start. Andrea started from a non-tropical rain weather area off the coast of Daytona Beach, Florida. After staying close to the same area, on May 10, Andrea weakened into a subtropical depression after coming near to dry air and wind shear, and on the next day, the National Hurricane Center stopped looking at the storm and stopped giving out advisories.

The storm made bad surf along the beach areas from Florida to North Carolina. Andrea killed a total of 6 people not in a direct way, and 5 of those deaths happened when Andrea was extratropical before being a subtropical storm. 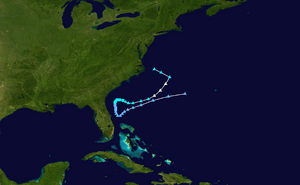 Subtropical Storm Andrea formed out of an area of a kind of strong non-tropical rainy place that slowly moved around the Atlantic Ocean off the coast of South Carolina. After becoming stronger a bit more and having the National Hurricane Center look at the storm closely, it was named "Andrea" on May 9 after the NHC discovered that the system had a closed low-level spinning and looked subtropical.

The storm did little more than stay near the same place before it became weak and turned into a subtropical depression after coming in contact with dry air and wind shear, both things which weaken tropical and subtropical cyclones. Andrea then died out off the coast of Florida on May 11 after collapsing because of bad weather conditions for the storm.

The extratropical system that would later be Andrea created high waves that made the National Weather Service give a High Surf Advisory at the coastlines between Florida and North Carolina. Almost right after the NHC called the storm Andrea, it also gave out Tropical Storm Watches to Florida and Georgia's coast. But the NHC those stopped giving out advisories after Andrea weakened into a depression. Also, a gale warning was given out for much of the South Carolina coastline.

Andrea was known to have killed a total of 6 people, while 5 of the people killed happened before Andrea became a subtropical storm. Also, the storm only made small damages between the Florida and the North Carolina coast.

All content from Kiddle encyclopedia articles (including the article images and facts) can be freely used under Attribution-ShareAlike license, unless stated otherwise. Cite this article:
Subtropical Storm Andrea (2007) Facts for Kids. Kiddle Encyclopedia.