Tropical Storm Ingrid was a weak tropical storm that existed from September 12 – 17, 2007. It was the ninth named storm of the 2007 Atlantic hurricane season. The storm developed as Tropical Depression Eight. Tropical Depression Nine appeared at the same time as Eight but was much quicker to develop. Tropical Depression Nine strengthened into Humberto–the next name on the list–before Eight became a named storm. Tropical Storm Ingrid was a weak storm. It only lasted for a short amount of time. The storm got weaker in the Atlantic because of high wind shear. Ingrid died out before reaching land areas. There was rain in Saint Martin and Antigua because of the storm. 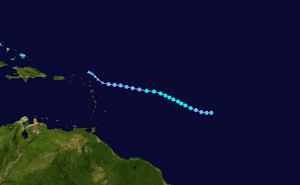 The system formed from a big tropical wave that moved off the coast of west Africa on September 6. Because of strong wind shear, it did not get stronger over the next three days. On September 9, it developed an area of low pressure in the central Atlantic, between the coast of Africa and the Lesser Antilles. Slowly, the wind shear began to go away. Dvorak classifications were started on the weather system on September 11. By the morning of September 12, it had developed into Tropical Depression Eight. This took place about 1,125 mi (1,811 km) east of the Lesser Antilles. The same tropical wave eventually created another area of weather activity that became Tropical Depression Ten, with the help of other weather systems.

The system moved towards the west-northwest for almost all of its life. It stayed on the southern edge of a meteorological ridge. Wind shear slowed down development greatly. The system stayed a tropical depression for 24 hours before convection increased. The storm became a weak tropical storm early on September 13. The storm kept getting stronger that afternoon. It reached its highest strength of 45 mph (75 km/h) that evening.

The storm did not get stronger because of a very strong wind shear from a strong tropical upper tropospheric trough. Despite the high shear, Ingrid remained a weak tropical storm until the afternoon of September 15. It then weakened to a tropical depression while east of the Leeward Islands. Ingrid kept getting weaker as it passed to the northeast of the islands. The system stayed a tropical depression, because it continued to create strong thunderstorms. Ingrid became more organized for a short time on September 16. This event was short-lived. The storm became very disorganized once again that afternoon. It kept getting weaker. The final National Hurricane Center advisory was given out early on September 17 as the system weakened into a tropical wave while remaining north of the Leeward Islands. The remnant low turned to the northwest within the low-level steering flow. It died out on September 18 without any reforming.

Ingrid stayed just to the east and northeast of the Lesser Antilles. It weakened without impacting any land. Its remnants produced rain and thunder to Antigua. On Saint Martin, the system produced 1.5 in (38.1 mm) of rain in about an hour. This caused some roads to become flooded. No damage or deaths were caused by the storm. No ships reported tropical storm-force winds.

All content from Kiddle encyclopedia articles (including the article images and facts) can be freely used under Attribution-ShareAlike license, unless stated otherwise. Cite this article:
Tropical Storm Ingrid (2007) Facts for Kids. Kiddle Encyclopedia.