Tropical Storm Melissa was the thirteenth named storm of the 2007 Atlantic hurricane season. It was a short-lived storm that formed southwest of the Cape Verde islands, remaining weak because of high wind shear. It dissipated without affecting any land areas. It was only notable for being the eighth named storm of September 2007, which tied the record for the month of September. 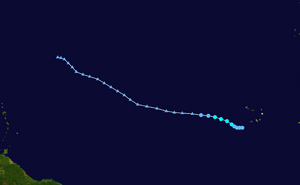 The system began as a tropical wave that moved off the west coast of Africa on September 26. An area of low pressure formed on September 27 near Cape Verde in association with the wave, and convection slowly increased as a result of the low. Early on September 28, a rapid increase in convection and a well-organized outflow pattern allowed the low to develop into Tropical Depression Fourteen while about 115 miles (185 km) west-southwest of the southernmost Cape Verde Islands. Since the depression was far removed from the subtropical ridge and an upper-level low pressure area was sitting to the north, steering currents were weak at first and the depression moved very slowly on a general west-northwest track. Vertical wind shear from the west also slowed down development. Small amounts of strengthening took place early on September 29 as convection increased in the system, and the depression was upgraded to Tropical Storm Melissa.

Like previous storms Ingrid and Karen, high wind shear in the deep tropics delayed Melissa's development. Operationally, Melissa was briefly upgraded to 45 mph (75 km/h) late on September 29 as some satellite estimates showed a slightly stronger storm with deeper convection, but Melissa was found to have been weaker in the post-storm analysis, remaining at 40 mph (65 km/h). By early on September 30, wind shear began to severely increase and a weakening trend began. That morning, the increased shear, combined with cooler sea surface temperatures, weakened Melissa to a tropical depression with a poorly-defined surface center as it continued to move west-northwest at a somewhat faster speed. The system lost its deep convection and by the afternoon of September 30, Melissa degenerated into a remnant low as thunderstorm activity decreased. After the circulation dissipated, the remnant low continued its general west-northwest track south of a rebuilding subtropical ridge in the central Atlantic. The low produced discontinuous amounts convection until it was absorbed by a frontal zone late on October 5 northeast of the Leeward Islands.

Melissa remained away from land during its lifespan, never threatening any land areas. There were no ship reports of tropical storm-force winds as a result of Melissa. No damage or deaths were reported.

All content from Kiddle encyclopedia articles (including the article images and facts) can be freely used under Attribution-ShareAlike license, unless stated otherwise. Cite this article:
Tropical Storm Melissa (2007) Facts for Kids. Kiddle Encyclopedia.