Wind shear is a difference in either wind speed or direction over a fairly short distance in the atmosphere. Wind shear can be divided into two different types: horizontal and vertical wind shear. 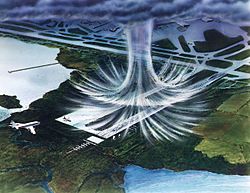 NASA schematic of the downward motion of the air until it hits ground.

When wind shear is observed

Weather situations when the Wind shear is observed happen:

All content from Kiddle encyclopedia articles (including the article images and facts) can be freely used under Attribution-ShareAlike license, unless stated otherwise. Cite this article:
Wind shear Facts for Kids. Kiddle Encyclopedia.