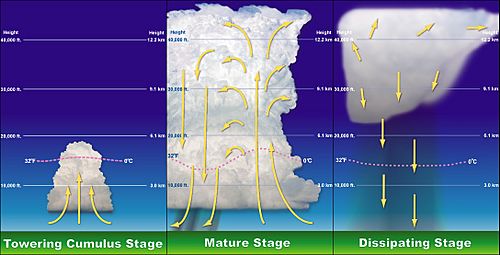 Stages of a cumulonimbus cloud's life

Cumulonimbus, from the Latin cumulus ("heap") and nimbus ("rainstorm", "storm cloud"), is a dense towering vertical cloud associated with thunderstorms and atmospheric instability, forming from water vapor carried by powerful upward air currents. If observed during a storm, these clouds may be referred to as thunderheads. Cumulonimbus can form alone, in clusters, or along cold front squall lines. These clouds are capable of producing lightning and other dangerous severe weather, such as tornadoes. Cumulonimbus progress from overdeveloped cumulus congestus clouds and may further develop as part of a supercell. Cumulonimbus is abbreviated Cb. 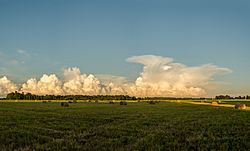 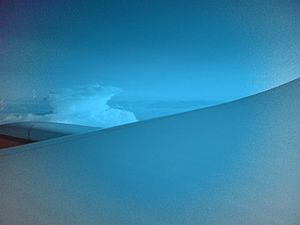 Overshooting top of a cumulonimbus viewed from a plane

Cumulonimbus storm cells can produce torrential rain of a convective nature (often in the form of a rain shaft) and flash flooding, as well as straight-line winds. Most storm cells die after about 20 minutes. If there is enough solar energy in the atmosphere, however (on a hot summer's day, for example), the moisture from one storm cell can evaporate rapidly—resulting in a new cell forming just a few miles from the former one. This can cause thunderstorms to last for several hours. Cumulonimbus clouds can also bring dangerous winter storms (called "blizzards") which bring lightning, thunder, and torrential snow. However, cumulonimbus clouds are most common in tropical regions.

Clouds form when the dewpoint of water is reached in the presence of condensation nuclei in the troposphere. The atmosphere is a dynamic system, and the local conditions of turbulence, uplift and other factors give rise to many types of clouds. Various types of cloud occur frequently enough to have been categorized. Furthermore, some atmospheric processes can make the clouds organize in distinct patterns.

All content from Kiddle encyclopedia articles (including the article images and facts) can be freely used under Attribution-ShareAlike license, unless stated otherwise. Cite this article:
Cumulonimbus cloud Facts for Kids. Kiddle Encyclopedia.