James Richard "Rick" Perry (born March 4, 1950) is an American former politician. He was the 14th United States Secretary of Energy from March 2, 2017 through December 1, 2019. He was the Governor of Texas from 2000 to 2015. He is a Republican. He became governor when George W. Bush became President, and has been elected three more times. Perry was the longest governor in the United States for 14 years.

On December 13, 2016, then-President-elect Donald Trump nominated Perry to serve as United States Secretary of Energy during his administration. He was confirmed by the United States senate on March 2, 2017.

Perry was born in Paint Creek, Texas. His parents were Joseph Perry and Amelia Holt. He grew up in West Texas and studied at Texas A&M University. During his early years, he was a farmer and a pilot.

In 1984, Perry was elected to the Texas House of Representatives as a Democrat from district 64, which included his home county of Haskell. He served on the House Appropriations and Calendars committees during his three two-year terms in office.

In April 1993, Perry, while serving as Texas agriculture commissioner, expressed support for the effort to reform the nation's health care, describing it as "most commendable".

In 1994, Perry was reelected Agriculture Commissioner by a large margin.

In 1998, Perry chose not to seek a third term as Agriculture Commissioner, running instead for Lieutenant Governor to succeed the retiring Democrat Bob Bullock. He won the election.

Perry assumed the office of governor on December 21, 2000, following the resignation of George W. Bush – who was preparing to become President of the United States. In the 2001 legislative session, Perry set a record for his use of the veto, rejecting 82 acts, more than any other governor in any single legislative session in the history of the state since Reconstruction. He was elected again in 2002.

Perry's campaigns for lieutenant governor and governor focused on a tough stance on crime. He has supported block grants for crime programs. In 2007, Perry signed a law ending automatic arrest for cannabis possession.

Perry supports the death penalty. In June 2002, he vetoed a ban on the execution of mentally retarded inmates. As of September 18, 2014, there have been 278 executions since Perry first took office in December 2000.

Perry also ran for President of the United States in the 2012 Republican primaries. He was one of the last candidates to enter the race. He was a frontrunner for the nomination during the first month of his campaign, but he did not do well in many of the debates. On January 19, 2012, Perry withdrew his campaign and endorsed Newt Gingrich.

Perry has been mentioned as a possible challenger to U.S. Senator and fellow 2016 Republican presidential candidate Ted Cruz in 2018. Speculation about Cruz being challenged in the Republican primary arose during the 2016 Republican National Convention, when Cruz refused to endorse Donald Trump, the eventual Republican presidential nominee, whom Perry had endorsed after Cruz suspended his campaign. In a poll conducted from August 12 to 14 of that year by Public Policy Polling, Perry had a 46%-37% lead over Cruz. In November 2016, Perry declined to enter the senate race and endorsed Cruz in the elections. 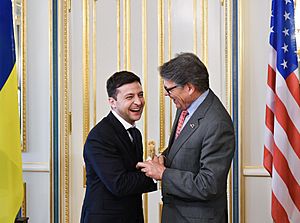 A July 25, 2019 telephone call between Trump and Ukraine president Volodymyr Zelensky led in September to a whistleblower complaint and an impeachment inquiry against Trump. Two weeks after the inquiry was launched, Trump claimed in a conference call with Congressional Republican leaders that he had only made the telephone call at Perry's urging. Perry denied ever mentioning Joe Biden in his discussions with Trump or Ukrainian officials.

Perry used to be a Methodist, but now attends an Evangelical "megachurch". Perry is also an Eagle Scout. Perry married Anita Thigpen in 1982. Together, they have two children.

Dancing with the Stars

On August 30, 2016, Perry was announced as one of the celebrities who would compete on season 23 of Dancing with the Stars. He was partnered with professional dancer Emma Slater. Perry and Slater were eliminated on the third week of competition and finished in 12th place.

All content from Kiddle encyclopedia articles (including the article images and facts) can be freely used under Attribution-ShareAlike license, unless stated otherwise. Cite this article:
Rick Perry Facts for Kids. Kiddle Encyclopedia.