Sons of the American Revolution facts for kids

Kids Encyclopedia Facts
Not to be confused with Sons of the Revolution. 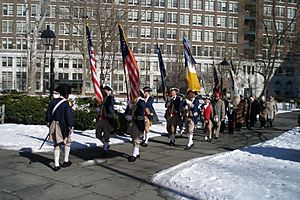 Philadelphia Continental Chapter of the SAR at a ceremony commemorating the birth of General and President George Washington at the Tomb of the Unknown Revolutionary War Soldier in Washington Square, Philadelphia

The National Society of the Sons of the American Revolution (SAR or NSSAR) is an American congressionally chartered organization, founded in 1889 and headquartered in Louisville, Kentucky. A non-profit corporation, it has described its purpose as maintaining and extending "the institutions of American freedom, an appreciation for true patriotism, a respect for our national symbols, the value of American citizenship, [and] the unifying force of 'e pluribus unum' that has created, from the people of many nations, one nation and one people."

The members of the society are male descendants of people who served in the American Revolutionary War or who contributed to establishing the independence of the United States. It is dedicated to perpetuating American ideals and traditions, and to protecting the Constitution of the United States; the official recognition of Constitution Day, Flag Day, and Bill of Rights Day were established through its efforts. It has members in the United States, Canada, France, Germany, Mexico, Spain, Switzerland, and the United Kingdom.

The organization is distinct from the Sons of the Revolution, a separate descendants heritage organization founded on February 22, 1876 by businessman John Austin Stevens and members of The Society of the Cincinnati. SAR Founder William Osborn McDowell disagreed with the Sons of the Revolution requirement at that time that all state societies were to be subordinate to the New York society. 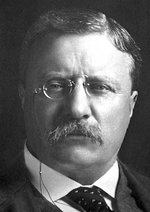 Theodore Roosevelt, a member of the organization, signed its Congressional Charter in 1906

The first organization of descendants of Revolutionary War patriots was established in San Francisco, California, in 1876. A group of men who were descendants of Revolutionary War veterans gathered to celebrate the centennial of the Declaration of Independence and the founding of the United States. They also wanted to honor the men and women who pledged their lives, fortunes, and livelihood to the striving for independence from Great Britain. This group formed an organization called the Sons of Revolutionary War Sires (SRWS). There is, however, no direct link between the SRWS and the SAR except that members of the SRWS were permitted to join the SAR after its founding in 1889.

The history of the SAR can be traced to the founding of the Sons of the Revolution, the New York Society which was organized in 1876. The SR was founded by John Austin Stevens who envisioned an aristocratic social and hereditary organization along the lines of the Society of the Cincinnati. In 1889 William Osborn McDowell, a New Jersey financier and businessman, organized the New Jersey Society of the Sons of the Revolution but was unwilling to accept the SR's requirement that other state societies be subordinate to the New York society. Furthermore, McDowell wanted the society to become more of a mass movement of descendants of Revolutionary patriots rather than an exclusive social club. As a result, McDowell organized the Sons of the American Revolution (SAR) at Fraunces Tavern in New York on April 30, 1889. This was the centennial for the inauguration of George Washington as the First President of the United States of America in 1789. SAR membership number 1 was assigned to McDowell. In addition to organizing the SAR, McDowell worked with six women to organize the National Society Daughters of the American Revolution on July 29, 1890.

The SAR was formally granted a congressional charter by an act of Congress under Title 36 of the United States Code on June 9, 1906. The act was signed by President Theodore Roosevelt, who was a member. 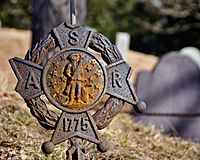 Membership in the society is open to any male of "good repute" who can prove lineal bloodline descent from an ancestor who actively supported the American Revolution. Acceptable ancestors include:

No state society or chapter may discriminate against an applicant on the basis of race or creed. The SAR claims a membership of over 37,000 members in over 550 chapters representing all 50 states in the United States, as well as societies in Canada, France, Spain, Germany, Switzerland, and the United Kingdom. Overall, about 200,000 descendants have been admitted since the founding of the S.A.R. in 1890. 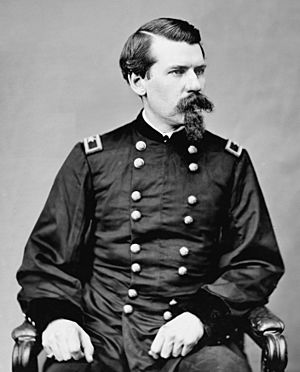 Horace Porter, U.S. Ambassador to France, served as President-General of the Sons of the American Revolution from 1892 to 1897.

The governance of the Sons of the American Revolution is made up of 10 National (General) Officers, 15 Vice-Presidents that preside over separate geographical regions and a Trustee elected from each state and international society. These officers meet several times over the year to discuss business pertaining to the society. The National Officers meet at least four times during their term of office, unless special meetings are called. The Trustees meet twice each year at the Society's Headquarters in Louisville, Kentucky. These meetings, known as the Fall and Spring Leadership Meetings, are normally held in late September and early March. During the Leadership Meetings committee recommendations and the society's budget are approved. While only the National Officers, Vice-Presidents and Trustees have the right to vote on the floor, all SAR members are welcome to attend and may request appointment to committees. The National Officers and Trustees also meet during the National Congress held in late June or early July of each year. Unlike the Leadership Meetings which always take place at the Society's National Headquarters, the National Congress is held in different locations throughout the United States. Locations are often selected in order to honor a historical event in United States history or in the history of the SAR, and there is an effort to alternate the meetings between the Eastern and Western United States. The National Congress is responsible for electing the National Officers and approving changes to the Society's constitution, along with any other motions brought before it. In addition to the National Officers, Vice-Presidents and Trustees, State and International Society Presidents and specially elected delegates from each society also attend with voting privileges. The number of delegates are determined by each State or International Society's membership size.

In addition to the larger meetings previously listed, there are over 60 standing and special committees that SAR members are appointed to in order to oversee the Society's welfare. Some of these committees include: facilities, insurance, genealogy, library, merchandise, medals and awards. All SAR members are welcome to participate on committees and are appointed by the Society's President General for a one-year term. There are no term-limits and all committee members have the right to vote on the committee's decisions.

The National Society of the Sons of the American Revolution has held a collection of genealogical reference dating back to 1889. Materials were originally kept by the Secretary General or Registrar General up until 1926, when the materials were moved to the Registrar General's office in Washington, D.C., in 1927, this collection was moved to the recently purchased Sixteenth Street Headquarters Building, and the collection had grown to 914 books by 1933. From this point until the move of Headquarters from Washington, D.C., to Louisville, Kentucky, the book collection grew at a rapid pace, growing to approximately 25,000 items by 1988. At this point, the Library was on the Second floor of the Headquarters building on South Fourth Street, and possessed a 544-square-foot vault for books not out in the library due to space.

Because of continuing growth, the SAR Library was moved in 2010 to a renovated building on West Main Street in the heart of the Historic Museum District of downtown Louisville. By this point, the Library collection had grown to over 58,000 items, mostly covering the Revolutionary War period, but also containing other genealogical materials. The library collection includes family histories, state genealogy materials, federal censuses, Revolutionary War pension applications, and CD collections, and the library separates materials based on State. The library also provides access to online research databases, including Ancestry.com, Footnote.com, and Heritage Quest Online.

The society operates a Merchandise Department that sells items intended for both SAR members and the general public. Among the products available to the general public are: clothing apparel for men and women, Revolutionary War replicas such as Liberty Bells and Field Cannons, jewelry for men and women such as lapel pins and cuff links, along with cups, mugs, key-chains, books, CDs, videos and knickknacks. Items intended for SAR members only include: clothing, decals, license plate holders and frames, certificates and medals corresponding to SAR activities, medals designed to reward active and retired military personnel, firefighters, EMS, JROTC and ROTC, individuals involved in education, Eagle Scouts and many others.

The Merchandise Department is located on the lower level of the SAR Genealogical Library, located at 809 West Main Street, just across the street from the Louisville Slugger Museum & Factory. 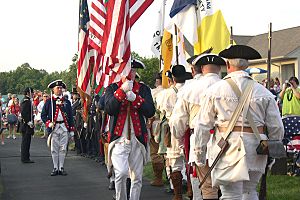 Indiana Society SAR Color Guard appearing with the recreated 19th US Infantry at an outdoor Fourth of July concert with the Indianapolis Symphony Orchestra.

The society is involved in historical research, raising funds for local scholarships and educational awards, and preservation of sites and documents related to the American Revolution. The SAR petitioned Congress to store Revolutionary era documents in a fire-proof area and make them available to the public, leading to the creation of the National Archives. It is also active in cataloging and marking Revolutionary War patriot graves and conducts an annual Eagle Scout scholarship program. The society is active in promoting "patriotism," and was instrumental in the establishment of Constitution Day. Several SAR societies and chapters have active color guard groups that appear in various public and private venues as a means of community outreach.

The SAR's national headquarters, located along Museum Row in downtown Louisville, Kentucky, contains the organization's administrative staff offices, SAR Genealogical Research Library, and the future site of an American Revolutionary War Education Center. The SAR is currently raising funds to finish the Center's development. The building houses original and copied art that commemorates important people and events of the Revolutionary War, as well as historical uniforms, flags, documents, and other colonial era pieces.

Symbolism of the SAR insignia

The SAR insignia consists of a Maltese cross surrounded by a garland, with a relief of George Washington in a center circle.

The insignia is normally worn suspended by a ribbon of blue, white and gold (buff) on the wearer's left breast. National officers and former state and chapter presidents wear the insignia suspended from a neck ribbon of the Society's colors.

On other occasions a rosette in the Society's colors is worn on the wearers left lapel.

Presidents of the United States

To date, 17 presidents of the United States have been members of the SAR. President Grant was admitted posthumously in recognition of his being a member of the Sons of Revolutionary Sires, whose members were later admitted to membership in the SAR.

Of the presidents who lived since the SAR's founding in 1889 and are not listed above, presidents Grover Cleveland, Richard Nixon, Bill Clinton and Barack Obama all had patriot ancestors but did not join the SAR. Presidents Woodrow Wilson, John F. Kennedy, Ronald Reagan, and Donald Trump did not have patriot ancestors.

Of the 22 presidents who served prior to the founding of the SAR, six qualify as patriot ancestors – George Washington, John Adams, Thomas Jefferson, James Madison, James Monroe and Andrew Jackson. Two others, Grant and Hayes, were members of SAR.

Vice presidents of the United States

(The rank indicated is the highest held by the individual and not necessarily that held at the time the Medal of Honor was earned or awarded.)

List of Presidents General of the Sons of the American Revolution

All content from Kiddle encyclopedia articles (including the article images and facts) can be freely used under Attribution-ShareAlike license, unless stated otherwise. Cite this article:
Sons of the American Revolution Facts for Kids. Kiddle Encyclopedia.