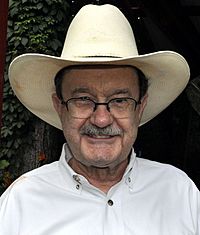 James Allen Hightower (born January 11, 1943) is an American columnist, progressive political activist, and author. From 1983 to 1991, he served as elected commissioner of the Texas Department of Agriculture during the Governships of Mark White and Bill Clements. He was born in Denison, Texas.

Hightower had endorsed Bernie Sanders for President of the United States in 2016, actively campaigning for the Democratic candidate.

All content from Kiddle encyclopedia articles (including the article images and facts) can be freely used under Attribution-ShareAlike license, unless stated otherwise. Cite this article:
Jim Hightower Facts for Kids. Kiddle Encyclopedia.