Denison is a city in Grayson County, Texas, United States. It is 75 miles (121 km) north of Dallas. The population was 22,682 at the 2010 census. Denison is part of the Texoma region and is one of two principal cities in the Sherman–Denison Metropolitan Statistical Area. Denison is known as the birthplace of Dwight D. Eisenhower, the 34th President of the United States. 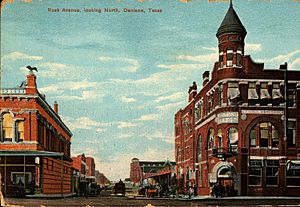 Denison was founded in 1872 in conjunction with the Missouri–Kansas–Texas Railroad (MKT) or "Katy" depot. It was named after the wealthy Katy vice president George Denison. Because the town was established close to where the MKT crossed the Red River (both important conduits of transportation in the industrial era), it came to be an important commercial center in the 19th century American West. In 1875, Doc Holliday had offices in Denison.

During the phylloxera epidemic of the mid-19th century, which destroyed the vast majority of wine grapes in Europe, Denison horticulturalist T.V. Munson pioneered methods in creating phylloxera-resistant vines, and earned induction into the French Legion of Honor, as well as sister city status for Denison and Cognac, France.

In 1915, the Kentucky-based evangelist Mordecai Ham held a revival meeting in Denison, which resulted in 1,100 professions of faith in Jesus Christ.

Denison played host to 20th century notables such as the Marx Brothers and President Dwight D. Eisenhower, who was born on October 14, 1890, in Denison.

Denison is located in northeastern Grayson County, with the city limits extending north to the Red River, which forms the Oklahoma state line. It is bordered to the south by the city of Sherman; the city centers are 11 miles (18 km) apart.

Denison Dam, which forms Lake Texoma on the Red River, is 5 miles (8 km) north of Denison. The city is in the center of the Texoma region, encompassing parts of Texas and Oklahoma.

Denison has a humid subtropical climate.

Denison is served by one 24-hour taxicab service provided locally by yellow cab. 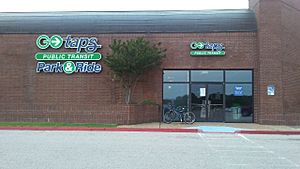 A TAPS pickup station at Midway Mall in Sherman

Denison is a member city of the regional public transportation system called TAPS, which offers on-demand service, fixed routes to Choctaw and Sherman, and services to Dallas/Fort Worth and Dallas Love Field airports. As of December 2015 TAPS had ceased most operations due to financial problems. Limited service is available for the handicapped. 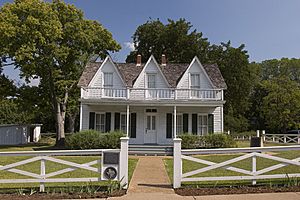 Denison is home to the Eisenhower Birthplace State Historic Site.

In 2013 Lake Texoma and the Hampton Inn and Suites Denison were featured on a travel show entitled The Official Best of Texas which aired on CBS and the Discovery Channel. 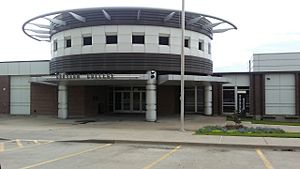 The administration building on the Grayson College campus in Denison

Denison is served by the Denison Independent School District. At the start of the 2014 school year, a new Denison High School building was completed and ready for use.

It is home to Grayson College, which preserves Denison's viticultural heritage with its T.V. Munson Viticulture & Enology Program.

Munson Stadium seats 5,262 people and is primarily used for football. It is the home field of Denison High School's football and soccer teams. The Denison High School football team won the 1984 Texas Class 4A State Championship by beating Tomball 27-13 completing a perfect 16–0 record. They also made three straight appearances in the 1995, 1996, and 1997 Class 4A Division II State Championship games, losing each time to La Marque.

They are home to the longest high school football rivalry in Texas: the Battle of the Ax, against Sherman High School.

President Dwight D. Eisenhower was born in Denison in 1890, and to date is the city's most notable resident. His birthplace was purchased by the city in 1946 (six years before he was elected President) and is now maintained as Eisenhower Birthplace State Historic Site. In addition, Eisenhower State Park on Lake Texoma is named in his honor.

Other notable people who were either born in or have lived in Denison include:

All content from Kiddle encyclopedia articles (including the article images and facts) can be freely used under Attribution-ShareAlike license, unless stated otherwise. Cite this article:
Denison, Texas Facts for Kids. Kiddle Encyclopedia.