Grayson County is a county in the U.S. state of Texas. As of the 2010 census, its population was 120,877. The county seat is Sherman. The county was founded in 1846 and is named after Peter Wagener Grayson, an attorney general of the Republic of Texas.

The earliest known inhabitants of what is now Grayson County were Caddo amerindian groups, including Tonkawa, Ionis, and Kichai. These groups engaged in agriculture and traded with Spanish and French at trading posts along the Red River. This resulted in the establishment of trading posts at Preston Bend on the Red River, Warren, and Pilot Grove during 1836 and 1837.

In the 1850s, trading and marketing at Preston Bend became more important, as agriculture became more grew in the county. This was helped by Preston Road, the first trail in the state which went from Preston Bend to Austin, Texas. More growth occurred after the establishment of Sherman as station of the Butterfield Overland Mail route in 1856.

Opinions in the county about secession were not uniform, with the county voting by more than two to one in 1861 to remain in the Union. The Great Hanging at Gainesville, where more than 40 men were killed, was a polarizing event. Men from Grayson County served the Confederacy at locations in the South. The Eleventh Texas Cavalry captured Federal forts in the Indian Territory north of the Red River.

Economic depression occurred in Grayson County and much of Texas during the Reconstruction era following the Civil War. Movement of cattle herds north along Preston Road provided needed income for the county during this period.

Settlement in Grayson County flourished during the 1870s and 1880s, when the Houston and Texas Central railroad and the Missouri, Kansas, and Texas Railroad began operating in the county in 1872. This led to the emergence of cotton as the dominant agricultural product. Many towns, including Denison, Van Alstyne, Howe, Whitewright, Pottsboro, and Tom Bean, were founded during this time.

In 1879, a group of settlers who had settled in north Texas both before and after statehood came together in Grayson County for political discussions. They formed the Old Settlers Association of North Texas. The association accepted donations and purchased 26 acres. They continued to meet on an annual basis for many years.

On May 15, 1896, a tornado measuring F5 on the Fujita scale struck Sherman. The tornado's damage path was 400 yards (370 m) wide and 28 miles (45 km) long, and it killed 73 people and injured 200. About 50 homes were destroyed, with 20 of them being completely obliterated. During the Sherman Riot of 1930 (May 9, 1930), Grayson County's elegant 1876 courthouse was burned down by arson during the trial of an African American man, George Hughes. During the riot, Hughes was locked in the vault at the courthouse and died in the fire. After rioters retrieved Hughes' body from the vault, it was dragged behind a car, hanged, and set afire. Texas Ranger Frank Hamer was in Grayson County during this riot and reported the situation to Texas Governor Dan Moody. Governor Moody sent National Guard troops to Grayson County on May 9 and more on May 10 to control the situation. Grayson County's current courthouse was completed in 1936.

The Bridge War, also called the Red River Bridge War or the Toll Bridge War, was a 1931 bloodless boundary conflict between the U.S. states of Oklahoma and Texas over an existing toll bridge and a new free bridge crossing the Red River between Grayson County, Texas, and Bryan County, Oklahoma.

In 1938, construction of a dam on the Red River was authorized by the U.S. Congress. The dam's construction was completed in part by the use of labor provided by German prisoners of war held at Camp Howze, in Cooke County, Texas, during World War II. The dam is now known as Denison Dam. Lake Texoma is used for recreation, irrigation, and electrical power generation.

Perrin Air Force Base was constructed in 1941. The base closure in 1971 was a blow to the county, although the availability of labor from the base contributed to the opening of industrial plants. The effect was lessened by the base's conversion to a civilian airport: North Texas Regional Airport - Perrin Field. 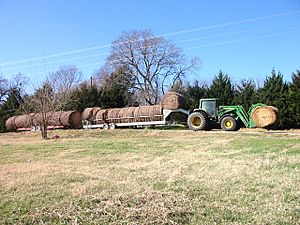 A rancher transports round bales of hay down a rural road in Grayson County, Texas. The economy of the county relies in part upon agriculture and ranchers.

The Eisenhower Birthplace State Historic Site, which is the birthplace of Dwight D. Eisenhower in Denison, was acquired and restored in 1952. Since 1993, the site is no longer maintained by the state, because of budget cuts, but it is maintained by a private nonprofit organization.

Grayson County is the only county in Texas where "deer may only be hunted with bows, no matter the season", according to an article by Thomas Phillips in the April 10, 2009, issue of Lone Star Outdoor News.

All content from Kiddle encyclopedia articles (including the article images and facts) can be freely used under Attribution-ShareAlike license, unless stated otherwise. Cite this article:
Grayson County, Texas Facts for Kids. Kiddle Encyclopedia.