Bryan County is a county located in the U.S. state of Oklahoma. As of the 2010 census, the population was 42,416. Its county seat is Durant. It is the only county in the United States named for Populist politician William Jennings Bryan.

Bryan County comprises the Durant, OK Micropolitan Statistical Area, which is included in the Dallas-Fort Worth and the Texoma region, TX-OK Combined Statistical Area. It is home to the headquarters of the Choctaw Nation of Oklahoma located in Durant. 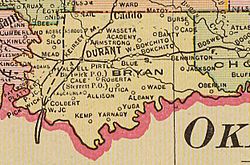 The area now known as Bryan County was occupied by the Choctaw Tribe in 1831-2, and became part of Choctaw Nation's Blue County. In 1845, the tribe opened Armstrong Academy for boys near the community of Bokchito. The academy served as Chahta Tamaha, the Choctaw capital, during the Civil War. Bloomfield Academy, a school for Chickasaw girls opened in 1852, just south of the present town of Achille.

The Butterfield Overland Mail and Stage route followed the older Texas Road across the present county during the late 1850s. General Albert Pike established Fort McCulloch for the Confederate Army near the present town of Kenefic on the Blue River. Although no Civil War battles occurred in the vicinity, the fort was garrisoned by more than a thousand Indian troops allied with the Confederates.

Several new towns were created after the Missouri, Kansas and Texas Railway (Katy) built a north-south line through this area in 1872. One such town was Colbert, which became the seat of Blue County and the largest town in the Choctaw Nation. The St. Louis, San Francisco and New Orleans Railroad, later bought by the St. Louis and San Francisco Railway (Frisco), built an east-west line in 1903.

Just prior to statehood, when all tribal governments were dissolved, Blue County was extinguished. Bryan County was officially established on November 16, 1907, and Durant became the county seat.

The Bridge War, also called the Red River Bridge War or the Toll Bridge War, was a 1931 bloodless boundary conflict between the U.S. states of Oklahoma and Texas over an existing toll bridge and a new free bridge crossing the Red River between Grayson County, Texas and Bryan County, Oklahoma. 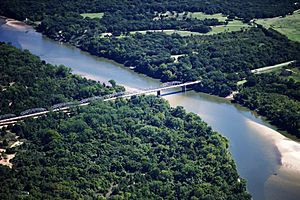 Aerial view of the State Highway No. 78 Bridge at the Red River 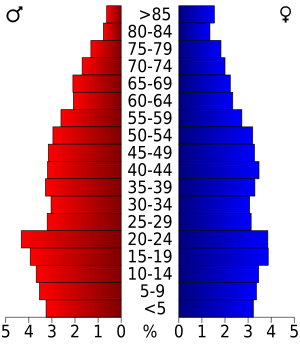 Age pyramid for Bryan County, Oklahoma, based on census 2000 data.

The following sites in Bryan county are on the National Register of Historic Places.

All content from Kiddle encyclopedia articles (including the article images and facts) can be freely used under Attribution-ShareAlike license, unless stated otherwise. Cite this article:
Bryan County, Oklahoma Facts for Kids. Kiddle Encyclopedia.