Kids Encyclopedia Facts
Not to be confused with Caddo County, Oklahoma. 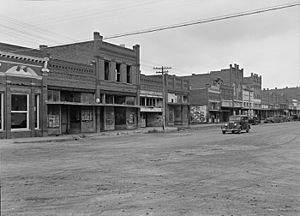 Caddo, Oklahoma in 1938 during The Great Depression as captured by Dorothea Lange.

Caddo is a town in Bryan County, Oklahoma, United States. The population was 997 at the 2010 census, a 5.6 percent gain over the figure of 944 recorded in 2000. The name is derived from a Caddo word, ka do hada’ cho, meaning "real chief" in English. According to Encyclopedia of Oklahoma History and Culture, the town was named for the nearby Caddo Hills.

The early inhabitants were Caddos and Choctaws, at least in the early 19th Century. A local legend says that the Caddis and the Choctaws had a fierce battle in 1840, about 2 miles (3.2 km) southeast of the site of present-day Caddo, The Choctaws won the battle, driving off the Caddos.

After a patent for the land, located on a buffalo trail, was obtained in 1872, the first settlers lived in tents.

In 1872, the Missouri-Kansas-Texas Railroad (Katy) built a line through the Choctaw Nation and established a station at Caddo. A post office was opened December 18, 1872, and the railroad reached Denison, Texas by Christmas Day. In 1873, the town population was about four hundred people. Caddo quickly became a shipping and trade center for the surrounding area. By 1890, Caddo had five cotton gins and a population of 2,170. Caddo incorporated as a city in 1898. It was then the most populous town in the region.

When the St.Louis and San Francisco Railway (Frisco) planned to build an east-west line through the area, land prices jumped up. Frisco officials decided to build their line through Durant instead of Caddo. Durant then became the fastest-growing town, and became the county seat when Bryan County was formed at statehood. By 1930, Caddo's population had fallen to 933.

In 1943, Guy A. Crossett, the editor of The Caddo Herald newspaper described Caddo's decline. “Caddo was a thriving town when Durant was a switch; when Hugo was a prairie; when Madill was unborn; when Coalgate was un-thought-of; when Ardmore was only in Pennsylvania; when Idabel was yet to be; when Atoka was a small village. Yet all have outgrown us. The reason is plain. We did not elect a delegate to Bill Murray’s famous Constitutional Convention; and tried to live upon the glories of the past. Finding out too late that we could not run the mill with water that has passed. Yet Caddo’s part in the history of the state is honorable. That is secure. The future is another thing.”

According to the United States Census Bureau, Caddo has a total area of 2.1 square miles (5.4 km2), all of it land.

There were 387 households, out of which 29.2% had children under the age of 18 living with them, 51.9% were married couples living together, 9.8% had a female householder with no husband present, and 34.1% were non-families. 32.3% of all households were made up of individuals, and 16.0% had someone living alone who was 65 years of age or older. The average household size was 2.34 and the average family size was 2.98.

Caddo holds its Heritage Day Festival on the first Saturday in October every year.

All content from Kiddle encyclopedia articles (including the article images and facts) can be freely used under Attribution-ShareAlike license, unless stated otherwise. Cite this article:
Caddo, Oklahoma Facts for Kids. Kiddle Encyclopedia.