Durant is a city in Bryan County, Oklahoma, United States and serves as the capital of the Choctaw Nation of Oklahoma. The population was 15,856 at the 2010 census. Durant is the principal city of the Durant Micropolitan Statistical Area, which had a population of 42,416 in 2010. Durant ranks as the second largest city within the Choctaw Nation, following McAlester, and ahead of Poteau. Durant is also part of the Dallas-Fort Worth Combined Statistical Area, anchoring the northern edge.

The city was founded by Dixon Durant, a Choctaw who lived in the area, after the MK&T railroad came through the Indian Territory in the early 1870s. It became the county seat of Bryan County in 1907 after Oklahoma statehood.

Durant is home to Southeastern Oklahoma State University and the headquarters of the Choctaw Nation. The city is officially known as the Magnolia Capital of Oklahoma. The city and its micropolitan are a major part of the Texoma region.

The Durant area was once claimed by both Spain and France before officially becoming part of the United States after the Louisiana Purchase and Adams–Onís Treaty. During the 1820s and 1830s the area was designated as part of the Choctaw Nation in the southern Indian Territory. During the Indian removals the Choctaws followed the Choctaw Trail of Tears from their ancestral homeland in Mississippi and Alabama into this area. The Choctaw Nation originally extended from the Mexican border in the west (now part of the Texas panhandle) to the Arkansas Territory in the east, from the Red River in the south to the South Canadian River in the north.

Pierre Durant and his four sons, all of French-Choctaw origin, made the journey up the Trail of Tears on the way to the southeastern part of the Choctaw Nation in 1832. The brothers, grown, with families of their own, established homesteads from the Arkansas line to Durant. One son, Fisher, married to a full-blood Choctaw, found a beautiful location for a home between Durant's present Eighth and Ninth avenues.

Fisher Durant's son Dixon Durant is recognized as the founder of Durant and is honored as its namesake. A minister, businessman and civic leader, Dixon Durant is credited with pastorates in local Presbyterian, Congregational and Methodist churches. He established the first store selling general merchandise in 1873, around the time of the 1872 creation of the Missouri–Kansas–Texas Railroad (Katy Railroad) siding at Durant, which was the initial impetus for establishing the community.

W.H. Hilton was elected the first mayor of Durant.

A memorable event in Durant's rail history occurred on April 5, 1905. A special southbound Katy train stopped in the city with President Theodore Roosevelt aboard.

Bryan County was created from Choctaw lands in 1907, the same time as statehood, and was named after William Jennings Bryan. Bryan was nominated three times for President of the United States and at the age of 36 lost to William McKinley. He lost to McKinley again in 1900, and to William H. Taft in 1908. Woodrow Wilson appointed the county's namesake as United States Secretary of State in 1913.

Eleven people were killed in Durant by a tornado in April 1919.

In 1953, actor José Ferrer and actress/singer Rosemary Clooney were married in Durant while Jose was performing in the musical Kiss Me, Kate in Dallas.

There were 6,331 households in the city, of which 26% had children under the age of 18 living with them, 37.3% were married couples living together, 14.2% had a female householder with no husband present, and 42.3% were non-families. Individuals living alone accounted for 32.9% of households and 25.3% had someone living alone who was 65 years of age or older. The average household size was 2.34 and the average family size was 2.96. 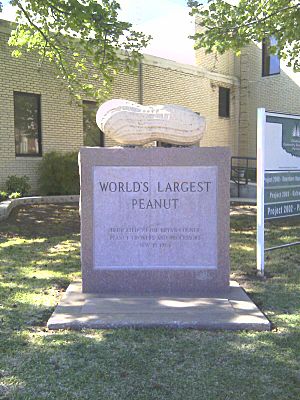 Durant is home to the annual Magnolia Festival and the Three Valley Museum. The festival is put on by the Durant Chamber of Commerce and Durant Main Street Program the weekend following Memorial Day. It features music, shopping, shows, and two pageants - the Magnolia Pageant and the Choctaw Princess Pageant.

Durant has a "World's Largest Peanut" monument, a title it shares with two other monuments in Texas and Ashburn, Georgia. This monument to the peanut growers in Bryan County is located on the front lawn of Durant's city hall. Dedicated in 1973, it includes a time capsule that contains historic and legal documents, which will be unearthed in the year 2023.

The Three Valley Museum houses historical artifacts of Bryan County. Opened in 1976, it is named for a book about Durant, Queen of the Three Valleys by Henry McCreary, which references the city's location in the middle of the Red, Blue River, and Washita River valleys. The museum's exhibits include an early law office, doctor's office, child's room, parlor, and general store.

The City of Durant maintains and operates 11 parks totaling more than 251 acres (1.02 km2). They include:

Less than 10 miles (16 km) away, Lake Texoma has between 8–10 million visitors every year and is the 12th largest lake in the United States, and also one of the largest reservoirs in the country, contributing to Durant's economic and population growth.

All content from Kiddle encyclopedia articles (including the article images and facts) can be freely used under Attribution-ShareAlike license, unless stated otherwise. Cite this article:
Durant, Oklahoma Facts for Kids. Kiddle Encyclopedia.