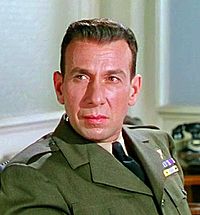 Ferrer in the trailer for The Caine Mutiny (1950)

Ferrer was married to Rosemary Clooney, aunt of George Clooney, from 1954 through 1961 and again from 1964 through 1967. They had a son, actor Miguel Ferrer. In 1985 he received the National Medal of Arts from President Ronald Reagan, becoming the first actor to receive that honor.

All content from Kiddle encyclopedia articles (including the article images and facts) can be freely used under Attribution-ShareAlike license, unless stated otherwise. Cite this article:
José Ferrer Facts for Kids. Kiddle Encyclopedia.