Old San Juan (Spanish: Viejo San Juan) is the oldest settlement within Puerto Rico and the historic colonial section of the city of San Juan. The settlement is a National Historic Landmark District and was listed on the National Register of Historic Places as the "Zona Histórica de San Juan" (English: San Juan Historic Site). 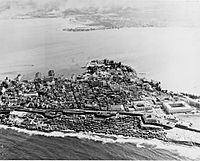 Old San Juan is located on a small and narrow island which lies along the north coast, about 35 miles (56 km) from the east end of Puerto Rico, and is united to the mainland of Puerto Rico by three bridges. It is bounded by the Atlantic Ocean to the north and to the south by San Juan Bay (or "Bahia de San Juan")—which lies between the city and the mainland. On a bluff about 100 feet (30 m) high at the west end of the island and commanding the entrance to the harbor, rise the battlements of Fort San Felipe del Morro, in which there is a lighthouse.

The city is characterized by its narrow, blue cobblestone streets, and flat roofed brick and stone buildings which date back to the 16th and 17th century—when Puerto Rico was a Spanish possession. Near Fort San Felipe del Morro, is the Casa Blanca, a palace built on land which belonged to the family of Ponce de Leon.

In 1508, Juan Ponce de León founded the original settlement, Caparra (named after the Province of Cáceres, Spain, birthplace of the then-governor of Spain's Caribbean territories, Nicolás de Ovando). The ruins of Caparra are known as the Pueblo Viejo sector of Guaynabo, behind the almost land-locked harbor just to the west of the present San Juan metropolitan area. In 1509, the settlement was abandoned and moved to a site which was called at the time "Puerto Rico" (meaning "rich port" or "good port"), a name that evoked that of a similar geographical harbor in the island of Gran Canaria, Canary Islands. In 1521, the name "San Juan" was added, and the newer settlement was given its formal name of "San Juan Bautista de Puerto Rico", following the usual custom of christening the town with both its formal name and the name which Christopher Columbus had originally given the islands, honoring John the Baptist.

Constructed in 1521, Casa Blanca served as the first fortification of the settlement and residence of Juan Ponce de León descendants, until the mid-eighteenth century.

Prior to the 19th century, the area outside the city walls occupying the east side of Old San Juan Island, was almost uninhabited. In 1838 the so-called area of Puerta de Tierra (or "Land Gate") had a population of 168 residents, mainly of African descent. According to a census made in 1846, the population had risen to 223 inhabitants living in 58 houses. On March 3, 1865, the municipal government of San Juan approved a resolution promoting the city expansion across the Puerta de Tierra which included the plan for demolishing the city walls along the eastern side. On May 28, 1897, the wall demolition was officially started after a proclamation was issued by Queen Maria Christina. By the year 1899, the population of Puerta de Tierra had risen to 5,453; while the area comprising the old walled city had a civilian population of roughly 18,103 inhabitants.

During the late 1940s, disrepair in the old city was evident. The local authorities were considering development proposals for renovating the old city and incorporating modern architecture on new constructions. Anthropologist Ricardo Alegría vehemently advised against the idea of razing old colonial buildings in favor of contemporary building designs. He followed the example suggested by his father, a local civic leader who had successfully prevented the demolition of the Capilla del Cristo in favor of a traffic redesign. He advised mayor Rincón de Gautier in having local zoning laws changed to favor remodeling and the incorporation of Spanish colonial motifs in any new construction. This helped preserve the city's architectural profile, and has been a key to San Juan's current status as a tourist destination.

Later, when Luis Muñoz Marín became governor of Puerto Rico, and the Institute of Puerto Rican Culture (Instituto de Cultura Puertorriqueña) was founded, Alegría—then named its first director—sought legal and administrative changes that would allow for major remodeling efforts to be successful. At the time, most real estate in Old San Juan had devalued under appraised values because the city was perceived as unsafe and not profitable for business (because of rent control statutes, as well as the reluctance of commercial banks to fund remodelings). Under combined efforts by the institute and the Government Development Bank for Puerto Rico, "model" remodelings were made to show potential property owners how their renewed properties could look. The Bank provided low interest loans to remodelers, and the government gave triple tax exemptions to commercial activities in the old city (they were exempted for a limited time, not only from property taxes and municipal taxes, but from income tax from activities generated in their properties as well). At least one retailer from the shopping district in Charlotte Amalie was given incentives to set up shop in the Calle del Cristo in order to persuade other retailers to follow suit and somehow "clean up" the district. Potential developers were offered sketches of their properties after a remodeling, as to suggest which architectural elements to improve or change. These efforts, however, did not prevent some city blocks from being razed.

Strict remodeling codes were implemented to prevent new constructions from affecting the common colonial Spanish architectural themes of the old city. There was a strong push to develop Old San Juan as a "small Manhattan". When a project proposal suggested that the old Carmelite Convent in San Juan be demolished to erect a new hotel, the Institute had the building declared a historic building, and asked that it be converted to a hotel in a renewed facility. This was what became the Hotel El Convento in Old San Juan.

The paradigm to reconstruct and renovate the old city and revitalize it has been followed by other cities in Latin America, particularly Havana, Lima and Cartagena de Indias. 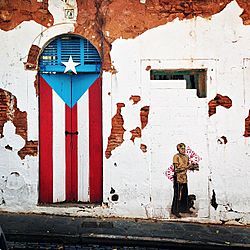 The neighborhood of La Perla outside of the historic city wall on the rocky north coast belongs to sub-barrios Mercado and San Cristóbal. The district is characterized by numerous public plazas and churches including San José Church and the Cathedral of San Juan Bautista, which contains the tomb of the Spanish explorer Juan Ponce de León. It also houses the most ancient Catholic school for Elementary education in Puerto Rico, the Colegio de Párvulos, built in 1865.

Old San Juan is one of the two barrios, in addition to Santurce, that made up the municipality of San Juan after 1864 and prior to 1951, in which the former independent municipality of Río Piedras was annexed. 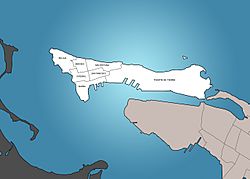 The oldest parts of the district of Old San Juan remain partly enclosed by massive walls. Several defensive structures and notable forts, such as the Fort San Felipe del Morro, Fort San Cristóbal, and El Palacio de Santa Catalina (also known as La Fortaleza), acted as the primary defense of the settlement which has been subjected to numerous attacks. La Fortaleza continues to serve also as the executive mansion for the Governor of Puerto Rico. Many of the historic fortifications are part of San Juan National Historic Site.

All content from Kiddle encyclopedia articles (including the article images and facts) can be freely used under Attribution-ShareAlike license, unless stated otherwise. Cite this article:
Old San Juan Facts for Kids. Kiddle Encyclopedia.