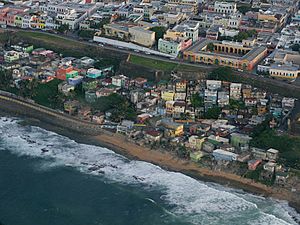 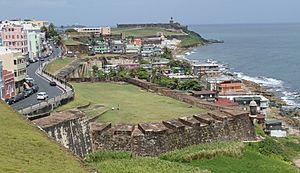 La Perla seen from Castillo San Cristóbal. The street on the left is Calle Norzagaray

La Perla is a historical shanty town astride the northern historic city wall of Old San Juan, Puerto Rico, stretching about 650 yards (600 m) along the rocky Atlantic coast immediately east of the Santa Maria Magdalena de Pazzis Cemetery and down the slope from (north of) Calle Norzagaray.

La Perla was established in the 18th century. Initially, the area was the site of a slaughterhouse because the law required the homes of former slaves and homeless non-white servants – as well as cemeteries – to be established away from the main community center; in this case, outside the city walls. Sometime after, some of the farmers and workers started living around the slaughterhouse and shortly established their houses there.

The streets of La Perla are not indicated on most city maps in order to deter tourists from walking into the high crime area:

La Perla was the true site of the fictional "La Esmeralda" barrio depicted in Oscar Lewis's sociological work "La Vida" describing the lives of Puerto Rican slumdwellers through taped interviews with dozens of intertwined family members who lived there in the 1940s-1960s.

La Perla belongs to and consists of the northernmost stretches of the sub-barrios Mercado (west) and San Cristóbal (east) of Old San Juan. The dividing line between the subbarrios is the imagined extension of Calle San Justo to the north beyond the old city wall to the Atlantic coast. The eastern part consists of Census blocks 3002, 3009 und 3010, with a population of 64, 35 housing units (4 unoccupied), and 31 households, on 41,348 square yards (8.5 acres; 34,572 m²).

All content from Kiddle encyclopedia articles (including the article images and facts) can be freely used under Attribution-ShareAlike license, unless stated otherwise. Cite this article:
La Perla, San Juan, Puerto Rico Facts for Kids. Kiddle Encyclopedia.