The rock dove, rock pigeon, or common pigeon (Columba livia) is a member of the bird family Columbidae (doves and pigeons). In common usage, this bird is often simply referred to as the "pigeon".

Wild rock doves are pale grey with two black bars on each wing, whereas domestic and feral pigeons vary in colour and pattern. Few differences are seen between males and females. The species is generally monogamous, with two squabs (young) per brood. Both parents care for the young for a time.

Habitats include various open and semi-open environments. Cliffs and rock ledges are used for roosting and breeding in the wild. Originally found wild in Europe, North Africa, and western Asia, pigeons have become established in cities around the world. The species is abundant, with an estimated population of 17 to 28 million feral and wild birds in Europe alone. 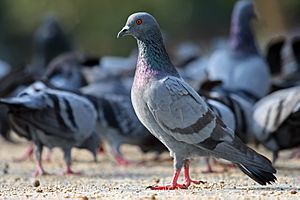 The rock dove was first described by Gmelin in 1789. Its closest relative in the genus Columba is the hill pigeon, followed by the other rock pigeons: the snow, speckled, and white-collared pigeons.

The species is also known as the rock pigeon or blue rock dove, the former being the official name from 2004–2011, when the International Ornithological Congress changed its official listing to the original British name of rock dove. 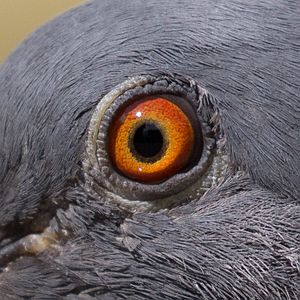 Bright orange eye of a pigeon 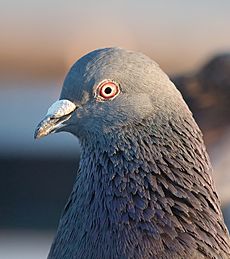 A distinctive operculum is located on top of the beak.

The adult female is almost identical in outward appearance to the male, but the iridescence on her neck is less intense and more restricted to the rear and sides, whereas that on the breast is often very obscure.

The white lower back of the pure rock dove is its best identification characteristic; the two black bars on its pale grey wings are also distinctive. The tail has a black band on the end, and the outer web of the tail feathers are margined with white. It is strong and quick on the wing, dashing out from sea caves, flying low over the water, its lighter grey rump showing well from above.

Young birds show little lustre and are duller. Eye colour of the pigeon is generally orange, but a few pigeons may have white-grey eyes. The eyelids are orange and encapsulated in a grey-white eye ring. The feet are red to pink. 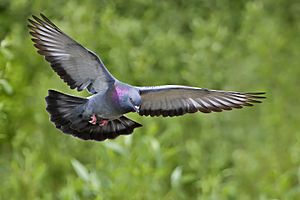 When circling overhead, the white underwing of the bird becomes conspicuous. In its flight, behaviour, and voice, which is more of a dovecot coo than the phrase of the wood pigeon, it is a typical pigeon. Although it is a relatively strong flier, it also glides frequently, holding its wings in a very pronounced V shape as it does. Though fields are visited for grain and green food, it is often not plentiful enough as to be a viewed as pest.

Pigeons feed on the ground in flocks or individually. They are scavengers, and frequently feed on human garbage. Pigeon groups typically consist of producers, which locate and obtain food, and scroungers, which feed on food obtained by the producers. Generally, groups of pigeons contain a greater proportion of scroungers than producers. They roost together in buildings or on walls or statues. When drinking, while most birds take small sips and tilt their heads backwards to swallow the water, pigeons are able to dip their bills into the water and drink continuously, without having to tilt their heads back. When disturbed, a pigeon in a group will take off with a noisy clapping sound that is said to be a cue for other pigeons in a flock to take to flight.

Pigeons, especially homing or carrier breeds, are well known for their ability to find their way home from long distances. Despite these demonstrated abilities, wild rock doves are sedentary and rarely leave their local areas. 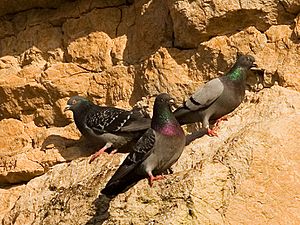 The rock dove has a restricted natural resident range in western and southern Europe, North Africa, and extending into South Asia. It is often found in pairs in the breeding season, but is usually gregarious. The species (including ferals) has a large range, with an estimated global extent of occurrence of 10,000,000 km2 (3,900,000 sq mi). It has a large global population, including an estimated 17 to 28 million individuals in Europe. Fossil evidence suggests the rock dove originated in southern Asia, and skeletal remains, unearthed in Israel, confirm its existence there for at least three-hundred thousand years. However, this species has such a long history with humans that it is impossible to identify the species' original range exactly.

Its habitat is natural cliffs, usually on coasts. Its domesticated form, the feral pigeon, has been widely introduced elsewhere, and is common, especially in cities, over much of the world. A rock pigeon's lifespan ranges from 3–5 years in the wild to 15 years in captivity, though longer-lived specimens have been reported. The main causes of mortality in the wild are predators and persecution by humans. The species was first introduced to North America in 1606 at Port Royal, Nova Scotia. 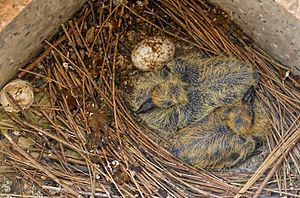 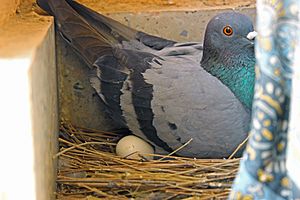 A pigeon incubating its eggs

The rock dove breeds at any time of the year, but peak times are spring and summer. Nesting sites are along coastal cliff faces, as well as the artificial cliff faces created by apartment buildings with accessible ledges or roof spaces.

The nest is a flimsy platform of straw and sticks, laid on a ledge, under cover, often on the window ledges of buildings. Two white eggs are laid; incubation, shared by both parents, lasts 17 to 19 days. The newly hatched squab (nestling) has pale yellow down and a flesh-coloured bill with a dark band. For the first few days, the baby squabs are tended and fed (through regurgitation) exclusively on "crop milk" (also called "pigeon milk" or "pigeon's milk"). The pigeon milk is produced in the crops of both parents in all species of pigeons and doves. The fledging period is about 30 days.

With only their flying abilities protecting them from predation, rock pigeons are a favourite almost around the world for a wide range of raptors. In fact, with feral pigeons existing in almost every city in the world, they may form the majority of prey for several raptor species that live in urban areas. Peregrine falcons and Eurasian sparrowhawks are natural predators of pigeons that are quite adept at catching and feeding upon this species. Up to 80% of the diet of peregrine falcons in several cities that have breeding falcons is composed of feral pigeons. Some common predators of feral pigeons in North America are opossums, raccoons, red-tailed hawks, great horned owls, eastern screech owls, and accipiters. The birds that prey on pigeons in North America can range in size from American kestrels to golden eagles and can even include gulls, crows, and ravens. On the ground, the adults, their young, and their eggs are at risk from feral and domestic cats. Doves and pigeons are considered to be game birds, as many species have been hunted and used for food in many of the countries in which they are native.

The body feathers have dense, fluffy bases and are loosely attached to the skin, hence they drop out easily. When a predator catches it, large numbers of feathers come out in the attacker's mouth, and the pigeon may use this temporary distraction to make an escape. It also tends to drop the tail feathers when preyed upon or under traumatic conditions, probably as a distraction mechanism.

Pigeons primarily use powder down feathers for preening, which gives a soft and silky feel to their plumage. They have no preen gland or at times have very rudimentary preen glands, so oil is not used for preening. Rather, powder down feathers are spread across the body. These have a tendency to disintegrate, and the powder, akin to talcum powder, helps maintain the plumage. Some varieties of domestic pigeons have modified feathers called "fat quills". These feathers contain yellow, oil-like fat that derives from the same cells as powder down. This is used while preening and helps reduce bacterial degradation of feathers by feather bacilli. 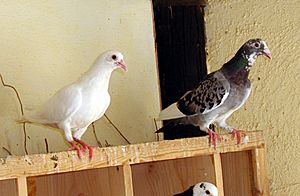 Rock doves have been domesticated for several thousand years, giving rise to the domestic pigeon (Columba livia domestica). Numerous breeds of fancy pigeons of all sizes, colours, and types have been bred. Domesticated pigeons are used as homing pigeons as well as food and pets. They were in the past also used as carrier pigeons, and so-called war pigeons have played significant roles during wartime, with many pigeons having received bravery awards and medals for their services in saving hundreds of human lives, including, notably, the British pigeon Cher Ami, which received the Croix de Guerre for actions during World War I, and the Irish Paddy and the American G.I. Joe, which both received the Dickin Medal, amongst 32 pigeons to receive this award, for their actions during World War II. 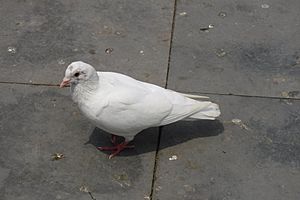 Many domestic birds have escaped or been released over the years, and have given rise to feral pigeons. These show a variety of plumages, although many have the blue-barred pattern as does the pure rock dove. Feral pigeons are found in large numbers in cities and towns all over the world. The scarcity of the pure wild species is partly due to interbreeding with feral birds.

All content from Kiddle encyclopedia articles (including the article images and facts) can be freely used under Attribution-ShareAlike license, unless stated otherwise. Cite this article:
Rock dove Facts for Kids. Kiddle Encyclopedia.