Santurce is one of the districts (or barrios) of San Juan, Puerto Rico, United States. It is also the biggest and most populated of all the districts in the capital. With a total population of 94,067, Santurce has a bigger population than most of the municipalities of Puerto Rico. As a result, it is also one of the most densely populated areas of the island (17,955.7 persons per square mile).

Santurce is one of the top ten most-populated areas of the island. It includes the neighborhoods of Miramar, Loíza, Isla Grande, Barrio Obrero, and Condado, which are cultural hot spots for art, music, cuisine, fashion, hotels, technology, multimedia, film, textile and startups.

Geographically speaking, Santurce is a peninsula that is attached to the mainland in the east, where it borders with the Isla Verde district of Carolina. It is 7.6 km long from west to east, and up to 3.0 km wide in the eastern part. The peninsula is bounded by the Atlantic Ocean in the north, with more than five km of beaches from the Condado peninsula in the west, to a point 600 m east of "Punta Las Marías", where it borders on the Isla Verde area, and "Laguna San José" and its northern embayment, "Laguna Los Corozos" to the east.

The topography is mainly flat with low hills toward the central areas and swampy areas to the south along the Martín Peña Channel and to the east near the Laguna San José (San José Lagoon). The highest point is at Monteflores with 23 meters (75 feet).

Santurce is located along the north-eastern coast of Puerto Rico. It lies south of the Atlantic Ocean, east of Old San Juan and west of Isla Verde. The district occupies an area of 5.24 square miles (13.6 km2) of land and 3.46 (8.96 km2) of water. It is surrounded by six (6) bodies of water: San Juan Bay, Condado Natural Lagoon, the Martín Peña Channel, San José Lagoon, Los Corozos Lagoon, and the Atlantic Ocean with its respective beaches and estuaries.

Santurce was originally settled by the native Indians and later by slaves of African ancestry who arrived from the neighboring Danish West Indies. Throughout the centuries, the district continued to grow due to its crossfade location between San Juan and its southern suburbs.

In 1876, an engineer from the port town of Santurtzi in Spain's autonomous Basque Country region known as Pablo Ubarri arrived on the island to help in the construction of a railroad system and a steam tramway between San Juan and the town of Río Piedras through the center of "Cangrejos" which prompted the gentrification of the district. Many years after his arrival he was granted the title of Count of Santurce (which is the Hispanicized equivalent of Santurtzi) by the Spanish Crown. With his newly acquired title and influence, the district was renamed after his title (a decision that has caused controversy ever since). The neighboring Condado also received its present-name from Ubarri's title, as the district's name literally translates to "county" (which in medieval tradition is land granted by a monarch to a count).

The Treaty of Paris provided that Cuba would become independent from Spain but the U.S. Congress made sure it would be under U.S. control through the Platt Amendment. It ceded to the United States Puerto Rico, and other adjacent islands then under Spanish sovereignty in the Caribbean, as well as Guam and the Philippines in Asia-Pacific region.

The United States Army established the now historical Camp Las Casas, in the area of "Las Casas" in 1904. The camp was the main training base of the "Porto Rico Regiment of Infantry" (on January 15, 1899, the military government changed the name of Puerto Rico to Porto Rico and on May 17, 1932, U.S. Congress changed the name back to "Puerto Rico") The Porto Rico Regiment of Infantry was a segregated U.S. Army Regiment which was later renamed the "65th Infantry Regiment". The base continued in operation until 1946, when it was finally closed and the Residencial Las Casas now stands.

In the 20th century the conurbation of the San Juan metropolis expanded rapidly beyond its walled confines of Old San Juan to incorporate the boroughs of suburban Miramar, Santurce, Isla Grande, and Condado, along the coast, as well as industrial Hato Rey, with its large sports stadium and modern financial district, and the college town of Río Piedras, immediately to the southeast. Between 1937 and 1948, Santurce along with neighboring district Miramar becomes one of the most vibrant areas of the capital. However, by the 1970s, most of the district had begun to fall into decay, losing the luster and vibrancy it once had. By 1980 the San Juan metropolitan area included the surrounding municipalities to the east and west and had about one-third of Puerto Rico's total population; that proportion has grown to two-thirds of the population.

After the September 11 attacks of 2001, Santurce saw a period of economic decline coupled with the financial crisis of the local banking & mortgage system. In 2009, the district began a period of cosmopolitan revival and economic growth as many local establishments such as bars, clubs, and restaurants opened their doors due to the importance of trade and tourism.

For centuries "barrios" have been the first "geo-political" division of Puerto Rico's municipalities, however presently they primarily serve for statistical purposes for both the U.S. Census Bureau & the Puerto Rico Planning Board. The most densely populated area lies to the southeast bordering the San José Lagoon and the Martín Peña Channel, while the least densely populated areas are found by the mangrove swamps to the south surrounding the Martín Peña Channel, and the western area of Isla Grande, which was a former United States Navy military base.

Population density per sub-district of Santurce according to Census 2000.

For reference, see above locator map of "sub-barrios" (sub-districts) of Santurce

Per capita income by sub-district of Santurce according to Census 2000. 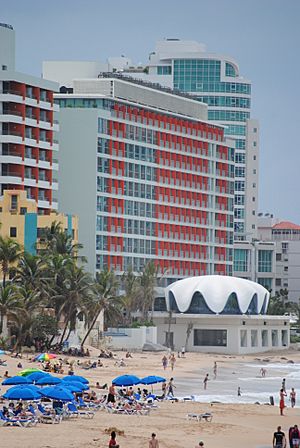 Public transportation is provided by several bus lines (locally known as guaguas) operated by the Puerto Rico Metropolitan Bus Authority and circulate along the main avenues of Ponce de León and Fernández Juncos among others.

In the peripheries of Santurce there is a rapid transit system called Tren Urbano. The Sagrado Corazón terminal station is located in the southeast section of the district in the neighborhood of Martín Peña. 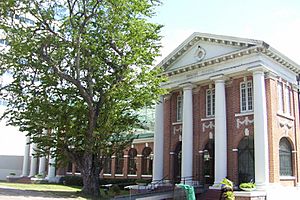 Santurce is the main residence of two major museums on the island. 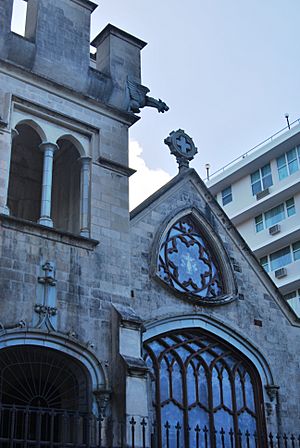 See also: Jewish immigration to Puerto Rico and History of the Jews in Latin America

Santurce is home to one of the largest Jewish communities in Puerto Rico with over 1,500 people attending two local synagogues. Jews were officially prohibited from settling in the island through much of its history, but many managed to settle in the island as secret Jews.

Many arrived from France, the Netherlands, Saint-Barthélemy and Curaçao after World War II. A minor portion are descendants of Jewish Cubans who came to establishment after Fidel Castro's Cuban Revolution of 1959. Like in many former Spanish colonies founded soon after the Spanish Inquisition, there are some Puerto Ricans who are Crypto-Jews. Some of them maintain elements of Jewish traditions, although they themselves are, or were raised as Christians.

All content from Kiddle encyclopedia articles (including the article images and facts) can be freely used under Attribution-ShareAlike license, unless stated otherwise. Cite this article:
Santurce, San Juan, Puerto Rico Facts for Kids. Kiddle Encyclopedia.