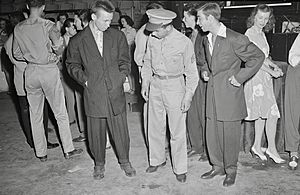 Zoot-suited hipsters in the 1940s

Hipster refers to a subculture of young, urban middle-class adults and older teenagers. Hipsters first appeared in the 1990s and became more noticeable in the 2010s. It is based on the earlier movements in the 1940s. Hipsters listen to independent music and alternative music. They dress in clothes that are different from other people. Hipsters wear vintage clothes and thrift store clothes. Hipsters believe in progressive or independent politics. They have an alternative way of living.

In a Huffington Post article entitled "Who's a Hipster?", Julia Plevin says that it hard to define who is a hipster.

As hipsters moved into suburbs near New York City, The New York Times made up the new word "Hipsturbia" to describe how hipsters live in suburbs.

All content from Kiddle encyclopedia articles (including the article images and facts) can be freely used under Attribution-ShareAlike license, unless stated otherwise. Cite this article:
Hipster (contemporary subculture) Facts for Kids. Kiddle Encyclopedia.