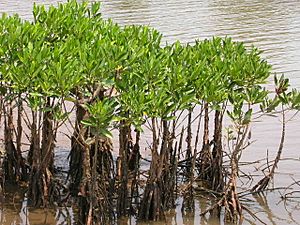 A Mangrove swamp is a distinct saline woodland or shrubland habitat formed by mangrove trees. They are characterized by depositional coastal environments, where fine sediments (often with high organic content) collect in areas protected from high-energy wave action. The saline conditions tolerated by various mangrove species range from brackish water, through pure seawater (3 to 4%), to water concentrated by evaporation to over twice the salinity of ocean seawater (up to 9%).

Mangrove swamps are home and sanctuaries for thousands of aquatic bird species, including:

Mangrove swamps protect coastal areas from erosion, storm surge (especially during hurricanes), and tsunamis. The mangroves' massive root systems are efficient at dissipating wave energy. Likewise, they slow down tidal water enough so its sediment is deposited as the tide comes in, leaving all except fine particles when the tide ebbs. In this way, mangroves build their own environments. Because of the uniqueness of mangrove ecosystems and the protection against erosion they provide, they are often the object of conservation programs, including national biodiversity action plans.

The protective value of mangrove swamps is sometimes overstated. Wave energy is typically low in areas where mangroves grow, so their effect on erosion can only be measured over long periods. Their capacity to limit high-energy wave erosion is limited to events such as storm surges and tsunamis. Erosion often occurs on the outer sides of bends in river channels that wind through mangroves, while new stands of mangroves are appearing on the inner sides where sediment is accruing.

All content from Kiddle encyclopedia articles (including the article images and facts) can be freely used under Attribution-ShareAlike license, unless stated otherwise. Cite this article:
Mangrove swamp Facts for Kids. Kiddle Encyclopedia.