Carolina is a city and municipality located on the northeast coast of Puerto Rico. It lies immediately east of the capital San Juan and Trujillo Alto; north of Gurabo and Juncos; and west of Canóvanas and Loíza. Carolina is spread over 12 barrios plus Carolina Pueblo (the downtown area and administrative center). It is part of the San Juan-Caguas-Guaynabo Metropolitan Statistical Area, and home to Puerto Rico's main airport, the Luis Muñoz Marín International Airport.

The town was founded by Spanish colonists in 1816 as Trujillo Bajo ("lower Trujillo"), along with its counterpart Trujillo Alto after Trujillo, Spain. In 1857 it was renamed to San Fernando de la Carolina, later shortened to Carolina, after Charles II of Spain.

The city is known as Tierra de Gigantes (Land of Giants), not only for well-known Carolina resident Don Felipe Birriel González (who was 7'11"), but also in honor of other people from Carolina, including poet Julia de Burgos and most notably the first Latin American player named to baseball's Hall of Fame, Roberto Clemente. Carolina was also home to Jesús T. Piñero, the first Puerto Rican to be appointed as governor by the United States government. The City is also known as "El Pueblo de los Tumba Brazos" (The Arm Hackers Town). During the late 1800s, the town's major export was sugar cane. Sugar cane workers solved their issues by fighting with their machetes, therefore many their arms. (needs reference) 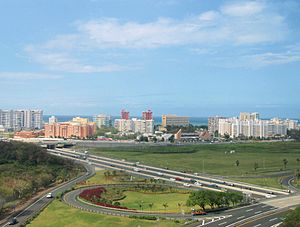 Carolina is one of Puerto Rico's most important tourist centers. Luis Muñoz Marín International Airport, the country's main airport, is located in Isla Verde. Also located in Carolina are a large group of hotels, which sit by Carolina's large beach area.

There are several well-known hotels on the coast of Carolina (Isla Verde area), including the El San Juan Resort and Casino, InterContinental San Juan Hotel and the Ritz-Carlton San Juan Hotel, Spa, and Casino. 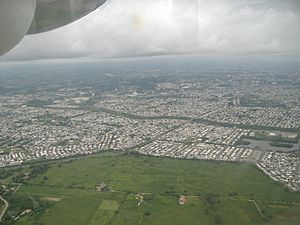 Aerial view of the city

Puerto Rico was ceded by Spain in the aftermath of the Spanish–American War under the terms of the Treaty of Paris of 1898 and became a territory of the United States. In 1899, the United States conducted its first census of Puerto Rico finding that the population of Carolina was 11,965.

The crown over the sword is the main attribute for royalty and for that reason it occupies a privileged position in the Coat of Arms. The sword is not only a symbol for military service, but also one of justice, recalling the virtues of San Fernando. The Coat of Arms has a wide edge of silver, a cultivated field of small tails of ermine shown in the conventional heraldic manner. The red symbolizes the first patriotic developments made for Puerto Rico's freedom under Spanish dominion.

Carolina is the home of Plaza Carolina, one of Puerto Rico's largest shopping malls.

Executive Airlines, an aircraft ground handling company and subsidiary of American Airlines, is headquartered on the grounds of Luis Muñoz Marín International Airport in Carolina.

There are 72 bridges in Carolina. The Teodoro Moscoso Bridge connects Carolina to San Juan. Luis Muñoz Marin International Airport is located in Carolina.

All content from Kiddle encyclopedia articles (including the article images and facts) can be freely used under Attribution-ShareAlike license, unless stated otherwise. Cite this article:
Carolina, Puerto Rico Facts for Kids. Kiddle Encyclopedia.