Capilla del Cristo (Chapel of Christ), also called Capilla del Santo Cristo de la Salud is a small chapel / museum located in the Old San Juan Historic District of Puerto Rico. Built in the 18th century, the structure has become a cultural icon of Puerto Rico and was saved from demolition in the 20th century. Most of the articles located at its altar are from 1753. Capilla del Cristo is listed in travel guides as one of the must-see places of Old San Juan. 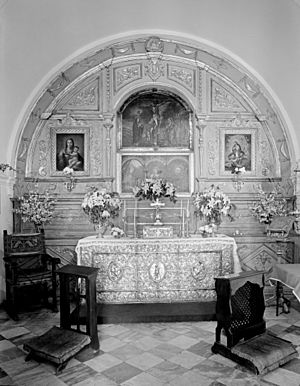 The chapel with its belfry is located in the Old San Juan Historic District in the western section of San Juan Islet, at the end of Calle del Cristo, now a pedestrian walkway, with no thru-traffic. Images of the chapel's facade are quite popular, and sometimes featured on the cover of a Puerto Rico travel guide. Getty Images has stock photo of Capilla del Cristo facade taken by at least two photographers thus the iconic image of the chapel's facade has ended up on canvas prints, posters and mug souvenirs.

Inside the chapel are paintings by Jose Campeche and a painting by Jorge Sen called El Milagro (English: The Miracle). Its altar is made of silver and gold.

The building is located at the end of Cristo Street, a cobblestone street, in the Historic District of Old San Juan not far from La Fortaleza, the residence of the governor of Puerto Rico.

The basic structure of the small temple is mampostería ordinaria or stones held together by mortar or cement. It is a one-story-high, brick and stone structure with a curved belfry atop. Structurally, it is a stone building. Its gate was added in the 1940s for the protection of its interior. It has three oversized arches which open up to the Parque de Palomas, Tetuan Street, and Calle de Cristo de la Salud (street). Built in the Spanish Baroque style, it is Juan Francisco Metre who is credited with its design. The building has been kept in good condition by the Cristo de la Salud Brotherhood, a group of volunteers.

Religious folklore, particularly among Catholics, said that during a horse race that was taking place on the street, a young rider and his horse took a bad fall and the rider went over the precipice but was miraculously saved.

The chapel was built at the site where the fateful race is said to have occurred, in honor of the young rider named Baltazar Montañez, or to prevent further accidents at the location. Either way, it has become a tourist attraction as well as a stop for religious pilgrims, who at times leave a religious votive at the chapel / museum. It is only open on Tuesdays.

Different versions of the legend mention that either the rider or Tomas Mateo Pratts, an observer yelled for divine intervention. In a book about Puerto Rican legends, José Ramirez-Rivera writes that the horse was killed but Baltazar lived. Afterwards, permission was granted to build the Catholic chapel and many festivals have been held, over the years, at the location to celebrate the miracle.

In his writings about Baltazar, Puerto Rican historian Cayetano Coll y Toste, described him as a slave who worked in the sugar cane fields of Puerto Rico but made no mention of the legendary accident.

All content from Kiddle encyclopedia articles (including the article images and facts) can be freely used under Attribution-ShareAlike license, unless stated otherwise. Cite this article:
Capilla del Cristo Facts for Kids. Kiddle Encyclopedia.