Coral Gables, officially the City of Coral Gables, is a city in Miami-Dade County, Florida, United States, located southwest of Downtown Miami. The city had a population of 49,700 as of the United States Census Bureau estimate of 2019. Coral Gables is a Mediterranean-themed planned community known for its historic and affluent character reinforced by its strict zoning, popular landmarks, and tourist sights.

Coral Gables is home to the University of Miami, whose main campus spans 239 acres (0.97 km2) in the city.

Coral Gables was one of the first planned communities, and prefigured the development of the gated community and the homeowners association. It is infamous for its strict zoning regulations. The city was developed by George Merrick during the Florida land boom of the 1920s. The city's architecture is almost entirely Mediterranean Revival style, including the Coral Gables Congregational Church, donated by Merrick. The domed, Catholic Church of the Little Flower was built somewhat later, in a similar Spanish Renaissance style. By 1926, the city covered 10,000 acres (4,000 ha) and had netted $150 million in sales, with over $100 million spent on development. 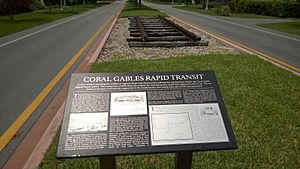 Merrick meticulously designed the downtown commercial district to be only four blocks wide and more than two miles (3 km) long. The main artery bisected the business district. Merrick could boast that every business in Coral Gables was less than a two-block walk. The city used to have an electric trolley system, which was replaced by the popularity of modern automobiles, but now a new free circulator trolley system, initiated in November 2003, runs down Ponce de León Boulevard.

In 1925, roughly simultaneous to the founding of Coral Gables, the city was selected as the home to the University of Miami, which was constructed that year on 240 acres (97 ha) of land just west of U.S. Route 1, approximately two miles south of downtown Coral Gables.

During World War II many Navy pilots and mechanics were trained and housed in Coral Gables. 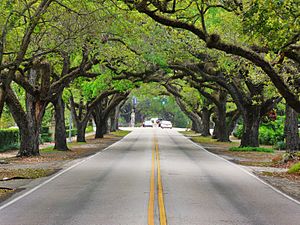 Coral Way, one of the many scenic roads through the Gables

Coral Gables is known as a pedestrian-friendly destination. Located four miles from Miami International Airport, the "City Beautiful" has around 140 dining establishments and gourmet shops, and many notable international retailers. Among the landmarks in Coral Gables are the Venetian Pool, Douglas Entrance, the Miami Biltmore hotel, and many fine residences. 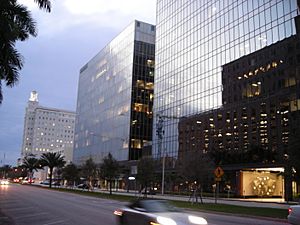 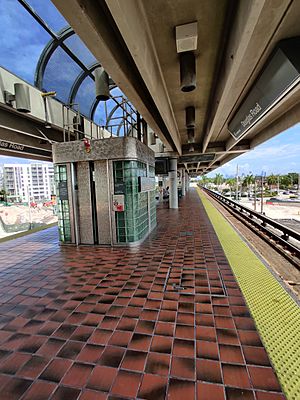 Coral Gables is served by Metrobus throughout the area, and by the Miami Metrorail at:

The City of Coral Gables also provides a free trolley service, with a trolley running a continuous circuit up and down Ponce de Leon Boulevard during the day.

Coral Gables is served by rapid transit on Douglas Road at Douglas Road station, at the University of Miami at University station, and near Sunset Drive and Red Road at South Miami station, connecting the city with Downtown Miami and Miami International Airport.

In addition, the Taipei Economic and Cultural Office in Miami, of the Republic of China, is located in Suite 610 at 2333 Ponce De Leon Boulevard.

The 2014 indie point and click adventure game, A Golden Wake, is based on the founding and development of Coral Gables in the 1920s.

The 2014 American comedy-drama television series, Looking, features a character named Augustin, who is from Coral Gables. 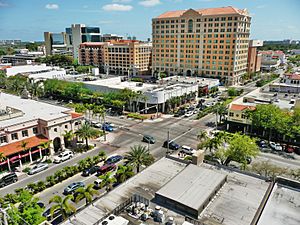 Coral Gables holds several of the wealthiest zip codes (33156, 33143, 33133, and 33146) and neighborhoods in the United States, such as Hammock Oaks, Old Cutler Bay, Gables Estates, Tahiti Beach, Snapper Creek and Lakes, Cocoplum, and Gables By The Sea. 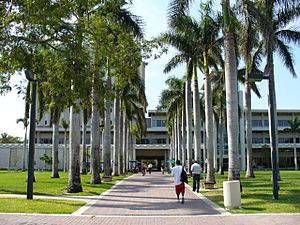 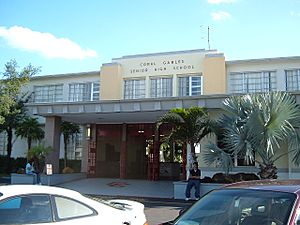 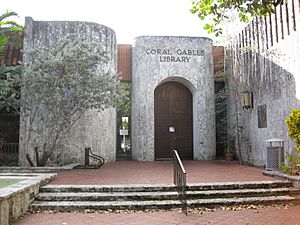 Coral Gables is the location of the University of Miami, a private university ranked in the top tier of national universities, with particular national status in the fields of business, engineering, law, marine science, medicine, communications, and music.

Coral Gables schools are part of the Miami-Dade School District, which serves Miami-Dade County. The district has several high schools in Coral Gables, most notably Coral Gables Senior High School and International Studies Preparatory Academy, both of which educate students in grades nine through 12. It also has a K–8 school, Coral Gables Preparatory Academy (formerly Coral Gables Elementary School), with two campuses, including a historic campus located on Ponce de Leon Boulevard. Henry S. West Laboratory Elementary is another school for K–6. Finally it has two middle schools: George Washington Carver Middle School located on Lincoln Dr, and Ponce de Leon Middle School located across from The University of Miami on the East side of U.S. Route 1 on Augusto Street. Present day George Washington Carver Middle was moved to the current location on Grand Avenue on land donated by George Merrick. When Carver died in 1942, the school was renamed in his honor.

All content from Kiddle encyclopedia articles (including the article images and facts) can be freely used under Attribution-ShareAlike license, unless stated otherwise. Cite this article:
Coral Gables, Florida Facts for Kids. Kiddle Encyclopedia.