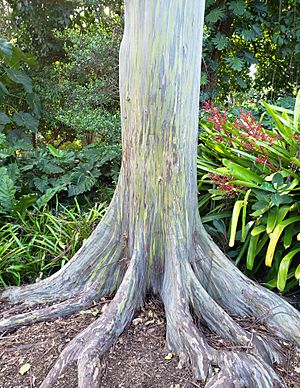 Fairchild Tropical Botanic Garden is an 83-acre (34 ha) botanic garden with extensive collections of rare tropical plants including palms, cycads, flowering trees, and vines. It is located in the city of Coral Gables, Miami-Dade County, Florida, United States, just south of Miami, surrounded at the south and west by Matheson Hammock Park.

Fairchild opened to the public in 1938.

Fairchild is a museum, laboratory, learning center, and conservation research facility whose main role is preserving biodiversity. It has 45,000 members and more than 1,200 volunteers. In 2012, Fairchild became the home of the American Orchid Society.

The garden was established in 1936 by Robert H. Montgomery (1872–1953), an accountant, attorney, and businessman with a passion for plant-collecting. The garden opened to the public in 1938. He named it after his friend David Fairchild (1869–1954), a significant plant explorer. Fairchild's travels brought more than 20,000 plants to the United States, including mangos, alfalfa, nectarines, dates, horseradish, bamboos, and flowering cherries. David Fairchild retired to Miami in 1935, but many plants still growing in the Garden were collected and planted by him, including a giant African baobab tree. Montgomery pursued the creation a botanical garden in Miami. He purchased the site, named it after Fairchild, and later deeded it in large part to Miami-Dade County.

The garden was designed by landscape architect William Lyman Phillips, member of the Frederick Law Olmsted partnership, and a leading landscape designer in South Florida during the 1930s. He was born in 1885 in Massachusetts and obtained his landscape architecture degree from Harvard in 1910. He came to Florida in 1924 and by 1933, he was working with the Dade County Park Department and drawing plans for Greynolds Park and Matheson Hammock Park. In 1938 Phillips began design for Fairchild Tropical Botanic Garden. Phillip's top three principles when designing Fairchild were: variety, consistency, and contrast. The primary buildings and landscape features, including the Montgomery Palmetum, Bailey Palm Glade, Allee and Overlook, Vine Pergola, Amphitheatre, Gate House, Montgomery Library and Museum, 14 lakes, stone terracing walls, irrigation systems, Moos Sunken Garden, and Nell Montgomery Garden House auditorium were built in the first 15 years. Later buildings included the Davis House (1953), Hawkes Laboratory (1960), Robbins Plant Science Building (1967), Rare Plant House (1968), Corbin Education Building (1972), Jean duPont Shehan Visitor Center (2002), and various additions over the years. In 2010 there was a groundbreaking ceremony for a new complex of buildings including the Paul and Swanee DiMare Science Village, Dr. Jane Hsaio Tropical Research Laboratories, Clinton Family Conservatory, and Burns Building. The Science Village complex opened December 2012 and was designed by Miami architect Max Strang.

The collection at Fairchild Gardens includes rare palms, cycads, orchids, and bromeliads. The collections also include different varieties of ginger. Fairchild has the largest collection of tropical bamboo in the world, with 125 species of bamboo.  The Michaux Bahamas Collection includes native woody plants and flora from botanical expeditions to the Bahamian islands. The Montgomery Palmetum consists of the most documented palm collections with species from all over the world. Fairchild features some of the world's most exotic tropical fruits, such as Durian, from the Amazon, Borneo, Indonesia, Malaysia, and Thailand. 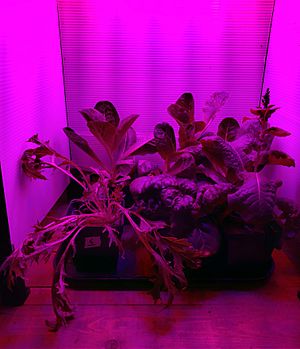 These have been selected because of conservation need, institutional expertise, and history. Main activities include field exploration of important plant areas, conservation assessments, species recovery, and direct support to in-situ conservation.

In 2014, Fairchild Gardens and the City of Coral Gables partnered with the Million Orchid project to restore the orchid's prominence in Miami-Dade County after native orchids were destroyed during the development of Miami more than a century ago.  Fairchild reintroduced three native orchid species to Coral Gables; the Florida butterfly orchid, the cowhorn orchid, and the cockleshell orchid. One of the other 18 species reintroduced was the tiger orchid, the largest orchid species in the world.

In 2015, Fairchild Tropical Botanic Garden has partnered with NASA’s Kennedy Space Center on the Growing Beyond Earth Challenge (GBC) to assist scientists with testing edible plants to be used for future space missions.  Testing involves using equipment for the project that emulates conditions on board the International Space Station. A little botany lab is also used to test growth with LED lighting and an irrigation system.

Fairchild Tropical Botanic Garden provides educational programs to all age groups, including simple horticultural study, art and painting, photography, and culinary courses. More than five educational programs are available at Fairchild Tropical Botanic Garden for kindergarten to 12th grade. Through scientific investigation and garden exploration, students learn the fundamentals of botany, landscape, and nature. The programs include the Explorer Program, Discovery Program, Adventure Program, Planet Mobile Program, and Homeschool Programs. Through one such program, The Fairchild Challenge, about 20,000 students at more than 120 K-12 schools across Miami-Dade County plant, maintain, grow, and learn in their school gardens. This program offers garden consultations and teacher workshops as well as provides school garden grants. They include staff supervision, guided activities, and hands-on learning experiences. A graduate fellowship is available which trains students in "systematics, ecology, evolutionary biology, and genetics" etc.

Wings of the Tropics

A butterfly house called "Wings of the Tropics" features exotic butterflies mainly from Central America, South America, and Southeast Asia flying freely in the 25,000 square foot (2,300 m2) Clinton Family Conservatory. Butterflies are released twice a day in the morning and afternoon. Among them are longwings, Morpho, and owl butterflies. The USDA-approved facility has butterfly feeding stations, which include a variety of overripe fruits such as banana and mango. There is a concrete walkway leading around the landscaped enclosed area where visitors can walk freely among the butterflies that may land in one's shoulders or head. Triple sets of doors minimize the risk of escape of any of these butterflies that do not belong to the local fauna. Also at Fairchild, close to this conservatory, there is an outdoor butterfly garden where many native butterflies can be seen at anytime like monarchs, zebra longwings, julias, and gold rim swallowtails.

All content from Kiddle encyclopedia articles (including the article images and facts) can be freely used under Attribution-ShareAlike license, unless stated otherwise. Cite this article:
Fairchild Tropical Botanic Garden Facts for Kids. Kiddle Encyclopedia.