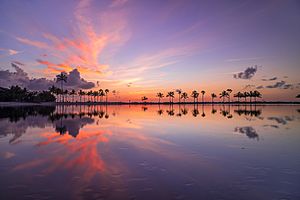 Round Beach at sunrise, with the Miami Skyline faintly in the background.

Matheson Hammock opened in 1930 as the first county park of Dade County, a gift of 80 acres to the county from William J. Matheson. Originally administered by the county's first director of public parks, A. D. Barnes, and designed by the landscape architect William Lyman Phillips, today it is owned and managed by Miami-Dade County.

Matheson wanted the land to be used as a park "to preserve the wild and natural beauty." It grew with further donations by the Matheson heirs, purchases by county commissioner Charles Crandon, and other donations to its current 630 acres. Civilian Conservation Corps (CCC) crews were assigned to Matheson Hammock in 1936 and began to develop the Bayfront park area. Coral stone buildings rose and the picnic area had a coral stone shelter.

Without the use of the inexpensive and skilled labor force under the state and federal assistance programs, it would have been impossible to build the miles of carefully hewn coral stone walls and native stone buildings. The quality of the CCC's work was verified in 1945 when a hurricane resulted in 12-foot waves rolling over Matheson Hammock, causing immense damage to equipment and furnishings, and depositing layers of mud and trash in the park, but the basic CCC structures stood firm and the park recovered.

Matheson Hammock Park is a scenic park featuring a man-made atoll pool, which is flushed naturally with the tidal action of adjacent Biscayne Bay. The beach sea breeze is popular among families. The park operates a snack bar and restaurant built into an historic coral stone building, picnic pavilions and nature trails.

In conjunction with the park, the county runs an on-site marina accommodating vessels of up to 50 feet (15 m). Other facilities include a fishing tackle shop, boat launch ramps, gas and diesel fuel, and wetslips.

All content from Kiddle encyclopedia articles (including the article images and facts) can be freely used under Attribution-ShareAlike license, unless stated otherwise. Cite this article:
Matheson Hammock Park Facts for Kids. Kiddle Encyclopedia.