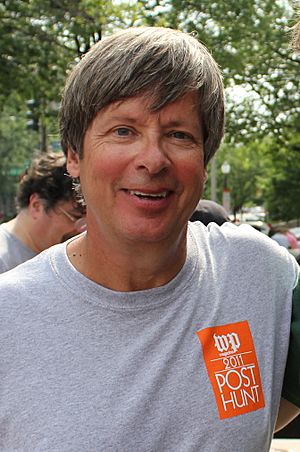 David McAlister Barry (born July 3, 1947) is an American author and columnist. He wrote a nationally syndicated humor column for the Miami Herald from 1983 to 2005. He has also written many books of humor and parody. He won the Pulitzer Prize for Commentary (1988) and the Walter Cronkite Award for Excellence in Journalism (2005).

Barry was born in Armonk, New York. He earned a Bachelor of Arts degree in English from Haverford College in 1969.

All content from Kiddle encyclopedia articles (including the article images and facts) can be freely used under Attribution-ShareAlike license, unless stated otherwise. Cite this article:
Dave Barry Facts for Kids. Kiddle Encyclopedia.