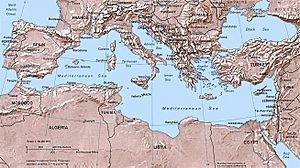 The Mediterranean Sea is the body of water that separates Europe, Africa and Asia.

The Mediterranean Sea is connected to the Atlantic Ocean by a narrow passage called the Strait of Gibraltar. It is between the southern tip of Spain and northern Morroco. It is almost completely surrounded by land, on the north by Europe, on the south by North Africa, and on the east by the Middle East. It covers around 2.5 million km² (965 000 mi²).

The 163 km (101 mi) long man-made Suez Canal in the southeast connects the Mediterranean Sea to the Red Sea. The canal is between Egypt and the Sinai peninsula. It was built by the French Compagnie Universelle du Canal Maritime de Suez from 1859 to 1869 against the British government.As a sea around which some of the most ancient human civilizations were arranged 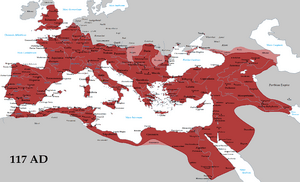 The Roman Empire at its farthest extent in AD 117

Some of the most ancient human civilisations were made around the Mediterranean Sea, so it has had a large influence on the history and ways of life of these cultures. It provided a way of trade, colonization and war, and was the basis of life (like fishing and catching other seafood) for many communities throughout the ages. The combination of similarly shared climate, geology and access to a common sea has led to lots of historical and cultural connections between the ancient and modern societies around the Mediterranean.

Above all, it was the superhighway of transport in ancient times. It allowed for trade and cultural exchange between peoples of the region — Phoenicians, Egyptians, Carthaginians, Greeks, Romans, and the Middle East (Arab/Persian/Semitic) cultures.

The history of the Mediterranean is important in understanding the origin and development of Western civilization. In modern times, the Mediterranean was the location of many battles at sea during World War II and control over it was important for defeating the Axis Powers, Nazi Germany and Fascist Italy. Today the Mediterranean Sea still connects the economies of Europe, North Africa, and the Middle East as it did in ancient times. The european migrant crisis has resulted in many refugees drowning in the Mediterranean Sea. 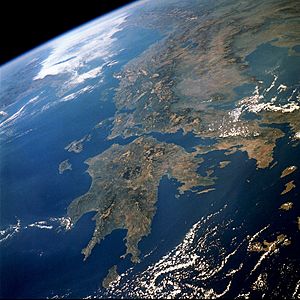 With its highly indented coastline and large number of islands, Greece has the longest Mediterranean coastline.

Being nearly landlocked affects the Mediterranean Sea's properties. Tides are limited by the narrow connection with the Atlantic Ocean. The water is saltier, partly because of evaporation. The Mediterranean has a deep blue color.

Evaporation greatly exceeds precipitation and river runoff in the Mediterranean, a fact that is central to the water circulation within the basin. Evaporation is especially high in its eastern half, causing the water level to decrease and salinity to increase eastward. This pressure gradient pushes relatively cool, low-salinity water from the Atlantic across the basin; it warms and becomes saltier as it travels east, then sinks in the region of the Levant and circulates westward, to spill over the Strait of Gibraltar. Thus, seawater flow is eastward in the Strait's surface waters, and westward below; once in the Atlantic, this chemically distinct "Mediterranean Intermediate Water" can persist thousands of kilometers away from its source.

All content from Kiddle encyclopedia articles (including the article images and facts) can be freely used under Attribution-ShareAlike license, unless stated otherwise. Cite this article:
Mediterranean Sea Facts for Kids. Kiddle Encyclopedia.