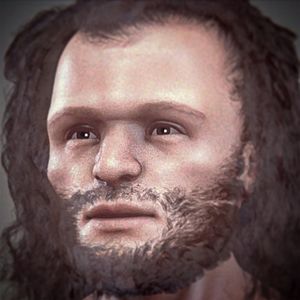 A computer-generated image of a Cro-Magnon, based on skulls found by archaeologists

The earliest known Cro-Magnon remains are between 35,000 and 45,000 years old, based on radiometric dating. The oldest remains, from 43,000 – 45,000 years ago, were found in Italy and Britain. Other remains also show that Cro-Magnons reached the Russian Arctic about 40,000 years ago.

Cro-Magnons had powerful bodies, which were usually heavy and solid with strong muscles. Unlike Neanderthals, which had slanted foreheads, the Cro-Magnons had straight foreheads, like modern humans. Their faces were short and wide with a large chin. Their brains were slightly larger than the average human's is today.

The name "Cro-Magnon" was created by Louis Lartet, who discovered the first Cro-Magnon skull in southwestern France in 1868. He called the place where he found the skull Abri de Cro-Magnon. Abri means "rock shelter" in French; cro means "hole" in the Occitan language; and "Magnon" was the name of the person who owned the land where Lartet found the skull. Basically, Cro-Magnon means "rock shelter in a hole on Magnon's land."

This is why scientists now use the term "European early modern humans" instead of "Cro-Magnons." In the scientific system which puts living things into categories, the term "Cro-Magnon" means nothing.

Mostly, the Cro-Magnon's bodies were shaped like humans' bodies are today. They had the same organs and other body parts that allow today's humans to speak, so the Cro-Magnons could also speak.

Unlike the Neanderthals, who focused more on just surviving, the Cro-Magnons created art, carefully made tools, made jewelry, and had their own culture. For example, the Cro-Magnons: 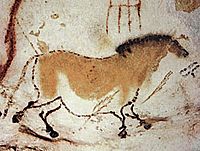 Like most early humans, the Cro-Magnons mostly hunted large animals. For example, they killed mammoths, cave bears, horses, and reindeer for food. They hunted with spears, javelins, and spear-throwers. They also ate things that came from plants.

The Cro-Magnons were nomadic or semi-nomadic. This means that instead of living in just one place, they followed the migration of the animals they wanted to hunt. They may have built hunting camps from mammoth bones; some of these camps were found in a village in the Ukraine. They also made shelters from rocks, clay, tree branches, and animal fur.

All content from Kiddle encyclopedia articles (including the article images and facts) can be freely used under Attribution-ShareAlike license, unless stated otherwise. Cite this article:
Cro-Magnon Facts for Kids. Kiddle Encyclopedia.