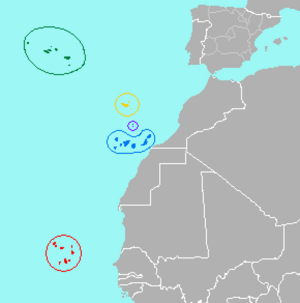 The Macaronesian islands, or simply Macaronesia is a modern name for several groups of islands of volcanic origin in the Atlantic Ocean off the coast of Europe and Africa. They belong to three countries: Portugal, Spain, and Cape Verde.

Macaronesia (Greek: makáron 'blessed', 'happy', nêsoi 'island'; 'blessed/fortunate islands'). This term was used by Ancient Greek geographers for islands to the west of the Strait of Gibraltar.

The modern use of the term Macaronesia goes to the botanist Philip Barker Webb in the 1830s for botanical descriptions. The name is occasionally misspelled "Macronesia" in analogy with Micronesia.

The following groups of islands (archipelagos) are commonly counted as being part of the Macaronesia - from north to south:

Spanish is spoken in the Canary Islands and Portuguese in the rest of the islands. Cape Verde was a colony of Portugal but it is independent since 1975. 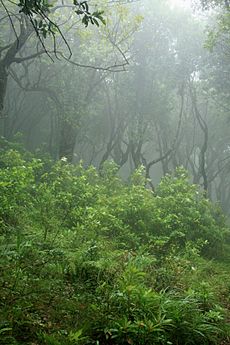 The islands of Macaronesia are volcanic in origin, and are thought to be the product of several geologic hotspots.

Even if the distances between the different groups of islands are large, the plants and animals are similar and there are many endemic plants that are found only in these islands.

The islands have a unique biogeography, and are home to several distinct plant and animal communities. The laurel forests, known as laurisilva, of Macaronesia are a type of mountain cloud forest with species of a vegetation type which originally covered much of the Mediterranean Basin when the climate of the region was more humid and evolved to adapt to island conditions. These forests once covered most of the Azores, Madeira, and parts of the Canary Islands ("Canaries") between 400–1200 m altitude (the eastern Canaries and Cape Verde being too dry).

Cutting the trees for timber and wood, clearing vegetation for grazing and agriculture, and the introduction of plants and animals by humans has displaced much of the native vegetation. The laurisilva has been reduced to small pockets. As a result, many of the endemic biota of the islands are seriously endangered or extinct.

All content from Kiddle encyclopedia articles (including the article images and facts) can be freely used under Attribution-ShareAlike license, unless stated otherwise. Cite this article:
Macaronesia Facts for Kids. Kiddle Encyclopedia.