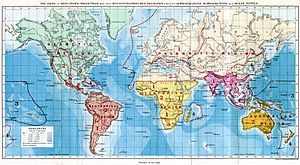 A map showing the zoogeographical regions.

Biogeography is the study of how species are distributed. It aims to show where organisms live, and why they are (or are not) found in a certain geographical area.

Biogeography teaches the reasons why this occurs by resarching species in different places in the world. Between about 1800 to 1855, natural historians made lists of species in various regions of the world. These lists were published as tables in their books. Charles Darwin and Alfred Russel Wallace published the idea of evolution by natural selection. They travelled to tropical countries to find out why species were suited to the places they lived, and wrote about the life in those countries. They said that evolution was the key to understanding geographical distribution.

New species are usually formed by speciation - the act of an earlier species splitting into two. This takes place at a certain time and place. These species may then travel to new places. but they may be stopped from doing so due to mountains and seas, and by climate. Some species may never arrive at certain places. This means that two places with similar climate can often have different kinds of animals and plants. For example, marsupials which live in Australia, and animals which moved because of the Great American Interchange - which meant that there were very different species which came to live in North America and South America.

Different types of animals and plants move in different ways. It is easier for birds and insects to fly through the air, but it is easier for fish to swim in the sea. There are very different species in North America and South America, and fresh-water fish do not come in many types.

It can then be said that:

Edward O. Wilson, biologist and conservationist, helped to start much of the research done on this topic recently

Wallace studied the distribution of flora and fauna in the Amazon Basin and the Malay Archipelago in the mid-19th century. Wallace and Sclater saw biogeography as a source of support for the theory of evolution. Key findings, such as the sharp difference in fauna either side of the Wallace Line, can only be understood in this light. Otherwise, the field of biogeography would be a purely descriptive one.

Both Darwin and Wallace gave a great deal of attention to oceanic islands as offering examples of evolution, especially speciation. Darwin worked a lot in the Galapagos islands This interest was revived by The theory of island biogeography by Robert MacArthur and E.O. Wilson in 1967. They showed that the variation in species in a single area could be predicted if one knew the habitat area, immigration rate, and extinction rate.

It was realised that habitat fragments are like islands. They can be investigated by the same methods. This spurred the development of conservation biology.

All content from Kiddle encyclopedia articles (including the article images and facts) can be freely used under Attribution-ShareAlike license, unless stated otherwise. Cite this article:
Biogeography Facts for Kids. Kiddle Encyclopedia.