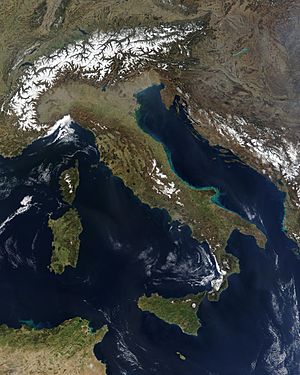 Satellite image of the Italian Peninsula in Spring 2003 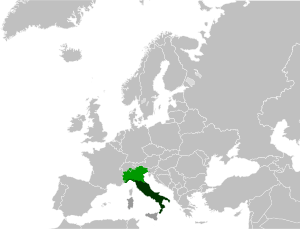 A map of the Italian Peninsula and its location in Europe.

The Italian Peninsula or Apennine Peninsula (Italian: Penisola italiana, Penisola appenninica) is a large peninsula of Southern Europe. It extends into the Mediterranean Sea, with the Ionian and Adriatic Seas on the east and the Tyrrhenian Sea on the west. It is located in between two larger peninsulas, the Iberian Peninsula and the Balkan Peninsula. Because of the peninsula's shape, it is nicknamed Lo Stivale ("The Boot"). Three smaller peninsulas contribute to this characteristic shape, namely Calabria (the "toe"), Salento (the "heel") and Gargano (the "spur").

The peninsula is about 1,000 kilometres (620 mi) long, starting from the Po Valley in the north. The Apennine Mountains cover most of its length. It mainly has the Mediterranean climate, though in the mountainous parts the climate is much cooler.

Since the reign of Roman Emperor Augustus (end of 1st century BC), the northern border of the peninsula has been set on the Alps drainage basin. Geographically, however, its northern end runs from the Magra to the Rubicon rivers, north of the Apennines in Tuscany and Emilia-Romagna. This definition does not include the Po Valley or the southern slopes of the Alps.

Nearly all of the peninsula is part of the Italian Republic, apart from San Marino and the Vatican City.

All content from Kiddle encyclopedia articles (including the article images and facts) can be freely used under Attribution-ShareAlike license, unless stated otherwise. Cite this article:
Italian Peninsula Facts for Kids. Kiddle Encyclopedia.