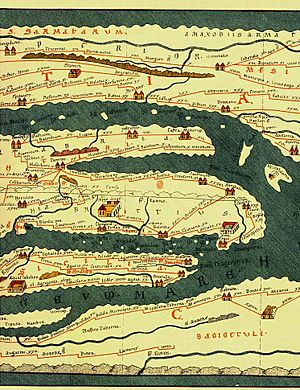 A portion of the Tabula Peutingeriana, a Roman map of the 4th century, depicting the southern part of Italia.

Italia was the name of the Italian Peninsula during the Roman era. It was not a province, but the territory of the city of Rome, thus having a special status. Italy and its borders expanded over time, until Augustus finally organized it as an administrative division consisting of eleven regions (from the Alps to the Ionian Sea). The islands of Corsica, Sardinia, Sicily and Malta were added to Italy by Diocletian in 292 AD. Roman Italy remained united until the sixth century, when it was divided between the Byzantine Empire and territories of the Germanic peoples. After that, Italy remained divided until 1861, when it was reunited in the modern Kingdom of Italy. Italia was the home of the capital of the Roman Empire - Rome itself.

All content from Kiddle encyclopedia articles (including the article images and facts) can be freely used under Attribution-ShareAlike license, unless stated otherwise. Cite this article:
Italia (Roman province) Facts for Kids. Kiddle Encyclopedia.