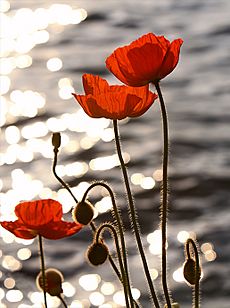 A poppy is a flowering plant in the subfamily Papaveroideae of the family Papaveraceae. Poppies are herbaceous plants, often grown for their colourful flowers. One species of poppy, Papaver somniferum, is the source of the narcotic drug opium which contains powerful medicinal alkaloids such as morphine and has been used since ancient times as an analgesic and narcotic medicinal and recreational drug. It also produces edible seeds. Following the trench warfare in the poppy fields of Flanders, Belgium during World War I, poppies have become a symbol of remembrance of soldiers who have died during wartime.

Poppies are herbaceous annual, biennial or short-lived perennial plants. Some species are monocarpic, dying after flowering. Poppies can be over a metre tall with flowers up to 15 centimetres across. Flowers of species (not cultivars) have 4 to 6 petals, many stamens forming a conspicuous whorl in the center of the flower and an ovary of from 2 to many fused carpels. The petals are showy, may be of almost any color and some have markings. The petals are crumpled in the bud and as blooming finishes, the petals often lie flat before falling away. In the temperate zones, poppies bloom from spring into early summer. Most species secrete latex when injured. Bees use poppies as a pollen source. The pollen of the oriental poppy, Papaver orientale, is dark blue, that of the field or corn poppy (Papaver rhoeas) is grey to dark green. The opium poppy, Papaver somniferum, grows wild in eastern and southern Asia, and South Eastern Europe. It is believed that it originated in the Mediterranean region.

Poppies belong to the subfamily Papaveroideae of the family Papaveraceae, which includes the following genera: 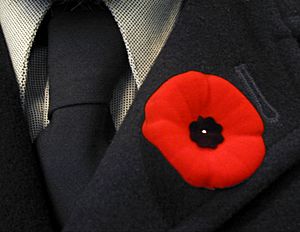 The flowers of most poppy species are attractive and are widely cultivated as annual or perennial ornamental plants. This has resulted in a number of commercially important cultivars, such as the Shirley poppy, a cultivar of Papaver rhoeas and semi-double or double (flore plena) forms of the opium poppy Papaver somniferum and oriental poppy (Papaver orientale). Poppies of several other genera are also cultivated in gardens. A few species have other uses, principally as sources of drugs and foods. The opium poppy is widely cultivated and its worldwide production is monitored by international agencies. It is used for production of dried latex and opium, the principal precursor of narcotic and analgesic opiates such as morphine, heroin and codeine. Poppy seeds are rich in oil, carbohydrates, calcium and protein. Poppy oil is often used as cooking oil, salad dressing oil, or in products such as margarine. Poppy oil can also be added to spices for cakes, or breads. Poppy products are also used in different paints, varnishes, and some cosmetics.

Ancient Egyptian doctors would have their patients eat seeds from a poppy to relieve pain. Poppy seeds contain small quantities of both morphine and codeine, which are pain-relieving drugs that are still used today. Poppy seeds and fixed oils can also be nonnarcotic because when they are harvested about twenty days after the flower has opened, the morphine is no longer present.

In Mexico, Grupo Modelo, the makers of Corona beer, used red poppy flowers in most of its advertising images until the 1960s.

Artificial poppies (called "Buddy Poppies") are used in the veterans' aid campaign by the Veterans of Foreign Wars, which provides money to the veterans who assemble the poppies and various aid programs to veterans and their families.

A poppy flower is depicted on the reverse of the Macedonian 500-denar banknote, issued in 1996 and 2003. The poppy is also part of the coat of arms of North Macedonia.

The girl's given name "Poppy" is taken from the name of the flower.

Poppies have long been used as a symbol of sleep, peace, and death: Sleep because the opium extracted from them is a sedative, and death because of the common blood-red color of the red poppy in particular. In Greek and Roman myths, poppies were used as offerings to the dead. Poppies used as emblems on tombstones symbolize eternal sleep. This symbolism was evoked in the children's novel The Wonderful Wizard of Oz, in which a magical poppy field threatened to make the protagonists sleep forever.

A second interpretation of poppies in Classical mythology is that the bright scarlet color signifies a promise of resurrection after death.

The poppy of wartime remembrance is Papaver rhoeas, the red-flowered corn poppy. This poppy is a common weed in Europe and is found in many locations, including Flanders, which is the setting of the famous poem "In Flanders Fields" by the Canadian surgeon and soldier John McCrae. In Canada, the United Kingdom, the United States, Australia, South Africa and New Zealand, artificial poppies (plastic in Canada, paper in the UK, Australia, South Africa, Malta and New Zealand) are worn to commemorate those who died in war. This form of commemoration is associated with Remembrance Day, which falls on November 11. In Canada, Australia and the UK, poppies are often worn from the beginning of November through to the 11th, or Remembrance Sunday if that falls on a later date. In New Zealand and Australia, soldiers are also commemorated on ANZAC day (April 25), although the poppy is still commonly worn around Remembrance Day. Wearing of poppies has been a custom since 1924 in the United States. Miss Moina Michael of Georgia is credited as the founder of the Memorial Poppy in the United States.

Red-flowered poppy is unofficially considered the national flower of the Albanians in Albania, Kosovo and elsewhere. This is due to its red and black colors, the same as the colors of the flag of Albania.

The California poppy, Eschscholzia californica, is the state flower of California.

The powerful symbolism of Papaver rhoeas has been borrowed by various advocacy campaigns, such as the White Poppy and Simon Topping's black poppy.

Papaver somniferum was domesticated by the indigenous people of Western and Central Europe between 6000 and 3500 BC. However, it is believed that its origins may come from the Sumerian people, where the first use of opium was recognized. Poppies and opium made their way around the world along the silk road. Juglets resembling poppy seed pods have been discovered with trace amounts of opium and the flower appeared in jewelry and on art pieces in Egypt, dated 1550-1292 BC.

The eradication of poppy cultivation came about in the early 1900s through international conferences due to safety concerns associated with the production of opium. In the 1970's the American war on drugs targeted Turkish production of the plant, leading to a more negative popular opinion of the U.S.

All content from Kiddle encyclopedia articles (including the article images and facts) can be freely used under Attribution-ShareAlike license, unless stated otherwise. Cite this article:
Poppy Facts for Kids. Kiddle Encyclopedia.