Opium poppy, Papaver somniferum var. album, is a species of plant. Opium and poppy seeds can be taken from them. A great number of opiates, for example, morphine, thebaine, codeine, papaverine, and noscapine, are made from opium. The Latin name means the "sleep-bringing poppy, white form". Some of these opiates make people feel sleepy.

The poppy is the only species of Papaveraceae that is an agricultural crop grown so much. Other species, Papaver rhoeas and Papaver argemone, are important agricultural weeds. They may be wrongly thought of as the crop.

The plant itself is also used as a decoration. It has been known as the "common garden poppy". It is widely grown as an ornamental flower in Europe, North America, South America, and Asia. 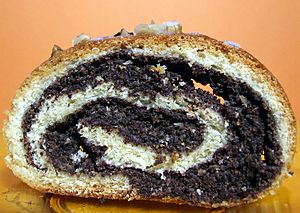 Poppy seeds of Papaver somniferum are important as food. It is where poppyseed oil, a healthy, useful oil, comes from. It is also where poppy seeds come from. The seeds have very little opiates. The oil that comes from them has even less.

All content from Kiddle encyclopedia articles (including the article images and facts) can be freely used under Attribution-ShareAlike license, unless stated otherwise. Cite this article:
Opium poppy Facts for Kids. Kiddle Encyclopedia.