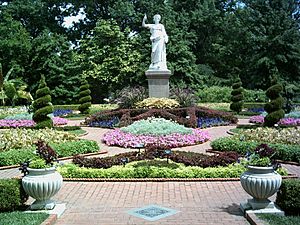 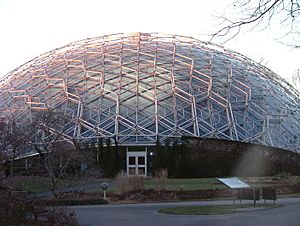 The Climatron greenhouse at the Missouri Botanical Garden simulates the climate of a rainforest for conservational and educational purposes.

The Missouri Botanical Garden is a botanical garden located at 4344 Shaw Boulevard in St. Louis, Missouri. It is also known informally as Shaw's Garden for founder and philanthropist Henry Shaw. Its herbarium, with more than 6.6 million specimens, is the second largest in North America, behind that of the New York Botanical Garden.

The land that is currently the Missouri Botanical Garden was previously the land of businessman Henry Shaw, a successful businessman and slave owner. In June 2020, the Missouri Botanical Garden shared a Facebook post with the names of some of Shaw's slaves who worked there: Peach, Juliette, Bridgette, Joseph, Jim, Sarah, Tabitha and her daughter Sarah, Ester and her children.

Founded in 1859, the Missouri Botanical Garden is one of the oldest botanical institutions in the United States and a National Historic Landmark. It is also listed in the National Register of Historic Places.

In 1983, the botanical garden was added as the fourth subdistrict of the Metropolitan Zoological Park and Museum District. 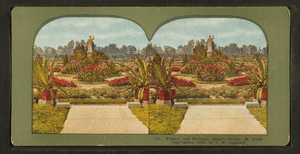 The garden is a center for botanical research and science education of international repute, as well as an oasis in the city of St. Louis, with 79 acres (32 ha) of horticultural display. It includes a 14-acre (5.7 ha) Japanese strolling garden named Seiwa-en; the Climatron geodesic dome conservatory; a children's garden, including a pioneer village; a playground; a fountain area and a water locking system, somewhat similar to the locking system at the Panama Canal; an Osage camp; and Henry Shaw's original 1850 estate home. It is adjacent to Tower Grove Park, another of Shaw's legacies.

After 40 years of service to the garden, Dr. Peter Raven retired from his presidential post on September 1, 2010. Dr. Peter Wyse Jackson replaced him as President.

Leaders of the garden

The garden is a place for many annual cultural festivals, such as the Japanese Festival and the Chinese Culture Days by the St. Louis Chinese Culture Days Committee. During this time, there are showcases of the culture's botanics as well as cultural arts, crafts, music and food. The Japanese Festival features sumo wrestling, taiko drumming, koma-mawashi top spinning, and kimono fashion shows. The garden is known for its bonsai growing, which can be seen all year round but is highlighted during the multiple Asian festivals. 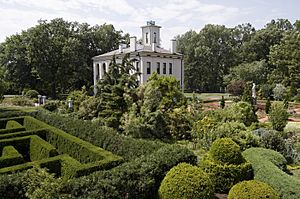 The EarthWays Center is a group at the Missouri Botanical Garden that provides resources on and educates the public about green practices, renewable energy, energy efficiency, and other sustainability matters.

The Shaw Nature Reserve was started by the Missouri Botanical Garden in 1925 as a place to store plants away from the pollution of the city. The air in St. Louis later cleared up, and the reserve has continued to be open to the public for enjoyment, research, and education ever since. The 2,400-acre (9.7 km2) reserve is located in Gray Summit, Missouri, 35 miles (56 km) away from the city.

The Plant List is an Internet encyclopedia project to compile a comprehensive list of botanical nomenclature, created by the Royal Botanic Gardens, Kew, and the Missouri Botanical Garden. The Plant List has 1,040,426 scientific plant names of species rank, of which 298,900 are accepted species names. In addition, the list has 620 plant families and 16,167 plant genera.

In September 2017 the Missouri Botanical Garden teamed up with the St. Louis Zoo and Washington University in St. Louis in a conservation effort known as the Living Earth Collaborative. The collaborative, run by Washington University scientist Jonathan Losos, seeks to promote further understanding of the ways humans can help to preserve the varied natural environments that allow plants, animals and microbes to survive and thrive.

Monsanto has donated $10 million to the Missouri Botanical Garden since the 1970s, which named its 1998 plant science facility the 'Monsanto Center'.

All content from Kiddle encyclopedia articles (including the article images and facts) can be freely used under Attribution-ShareAlike license, unless stated otherwise. Cite this article:
Missouri Botanical Garden Facts for Kids. Kiddle Encyclopedia.