Cornus canadensis (Canadian dwarf cornel, Canadian bunchberry, quatre-temps, crackerberry, creeping dogwood) is a species of flowering plant in the Cornaceae (dogwood) family, native to eastern Asia (Japan, Korea, northeastern China (Jilin Province) and the Russian Far East), the northern United States, Colorado, New Mexico, Canada and Greenland. Unlike its relatives, which are for the most part substantial trees and shrubs, C. canadensis is a creeping, rhizomatous perennial growing to about 20 cm (8 in) tall.

Cornus canadensis is a slow-growing herbaceous subshrub growing 10–20 cm tall, generally forming a carpet-like mat. The above-ground shoots rise from deep in the soil, and form clonal colonies under trees. The vertically produced above-ground stems are slender and unbranched. The leaves are oppositely arranged on the stem. In the fall, the leaves have red tinted veins and turn completely red.

In late spring to midsummer, white flowers are produced that are 2 mm (0.079 inches) in diameter with reflexed petals that are ovate in shape and 1.5–2 cm (5⁄8–3⁄4 inch) long. Stamens are very short, being 1 mm long. The anthers are yellowish white in color. Pollinators include bumblebees, solitary bees, bee flies, and syrphid flies. The fruits look like berries but are drupes.

Each flower has highly elastic petals that flip backward, releasing springy filaments that are cocked underneath the petals. The filaments snap upward flinging pollen out of containers hinged to the filaments. This motion takes place in less than half a millisecond and the pollen experiences two to three thousand times the force of gravity. The Bunchberry has one of the fastest plant actions found so far requiring a camera capable of shooting 10,000 frames per second to catch the action. 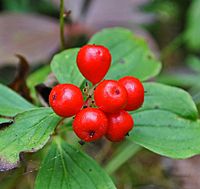 The drupes are green, globose in shape, turning bright red at maturity in late summer; each fruit is 5 mm in diameter and contains typically one or two ellipsoid-ovoid shaped stones. The fruits are edible with a mild flavour somewhat like apples. The large seeds within are somewhat hard and crunchy.

Cornus canadensis is a mesophytic species that needs cool, moist soils. It inhabits montane and boreal coniferous forests, where it is found growing along the margins of moist woods, on old tree stumps, in mossy areas, and amongst other open and moist habitats.

Birds are the main dispersal agents of the seeds, consuming the fruit during their fall migration. In Alaska, bunchberry is an important forage plant for mule deer, black-tailed deer and moose, which consume it throughout the growing season.

All content from Kiddle encyclopedia articles (including the article images and facts) can be freely used under Attribution-ShareAlike license, unless stated otherwise. Cite this article:
Dogwood Facts for Kids. Kiddle Encyclopedia.