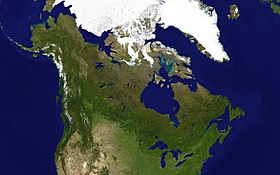 A satellite composite image of Canada. Boreal forests, visible as darker shades of green, prevail throughout most of the country, including the Arctic, the eastern slopes of the northern Coast Mountains and the Saint Elias Mountains. 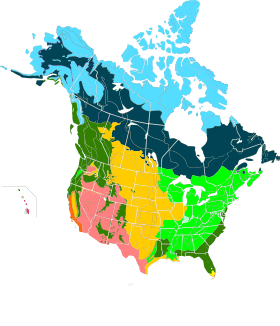 Distribution of taiga and boreal forests in North America (dark blue area in Canada and Alaska).

Canada's boreal forest comprises about one third of the circumpolar boreal forest that rings the northern hemisphere, mostly north of the 50th parallel.

All content from Kiddle encyclopedia articles (including the article images and facts) can be freely used under Attribution-ShareAlike license, unless stated otherwise. Cite this article:
Boreal forest of Canada Facts for Kids. Kiddle Encyclopedia.