Calypso is a genus of orchids containing one species, Calypso bulbosa, known as the calypso orchid, fairy slipper or Venus's slipper. It is a perennial member of the orchid family found in undisturbed northern and montane forests. It has a small pink, purple, pinkish-purple, or red flower accented with a white lip, darker purple spottings, and yellow beard. The genus Calypso takes its name from the Greek signifying concealment, as they tend to favor sheltered areas on conifer forest floors. The specific epithet, bulbosa, refers to the bulb-like corms.

Calypso bulbosa is a deciduous, perennial, herbaceous tuberous geophyte with a round, egg-shaped tuber as a perennial organ. It is encased in dead leaf sheaths and has elongated roots. Calypso orchids are typically 8 to 20 cm in height. At the bottom there is only a single leaf, which is stalked up to about 7 cm long. The leaves are whole eliptical lanceolate to egg-shaped blade is up to 6 cm long and up to 5 cm wide.

Plant blooms with a purple-pink hermaphroditic, zygomorphic and threefold flower. The protruding petals and sepals are pink to purple in color, about 10 to 12 millimeters long and about 2 to 4 millimeters wide. The lip (labellum) is white to pink with pink or yellow spots. It has a wide, shoe-shaped cavity in the back and is about 15 to 25 millimeters long. A spur is absent. They do not bloom until May and June usually after snow melt. Each bulb live no more than five years.

The chromosomes count is 2n = 28. Since the orchid seed does not provide any nutrient tissue, germination only takes place when infected by a Mycorrhizal root fungus.

The generic name Calypso Salisb, which is still valid today. was described in 1806 by the English gardener Richard Anthony Salisbury (1761-1829) in the work "Paradisus Londinensis", which Salisbury with the then director of the Royal Botanic Gardens in London, William Jackson Hooker (1785-1865), published. Carl von Linné originally assigned the Calypso bulbosa to the genus Cypripedium in 1753. But Calypso and Cypripedium belong to two different subfamilies in the botanical systematics.

The following generic names have been published as synonyms:

The Basionym Cypripedium bulbosum L. 1753 was described by Linné in "Species Plantarum".

The species names listed here are used as synonyms:

Four natural varieties and one nothovariety (variety of hybrid origin but established in the wild) are recognized: 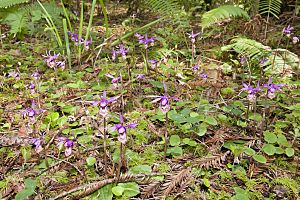 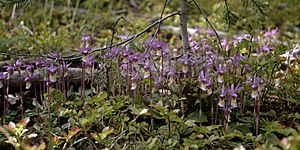 This species' range is circumpolar, and includes California, the Rocky Mountain states and most of the most northerly states of the United States; most of Canada; Scandinavia much of European and Asiatic Russia; China, Mongolia, Korea and Japan—see external links for map. It is found in subarctic swamps and marshes as well as shady places subarctic coniferous forests.

Although the calypso orchid's distribution is wide, it is very susceptible to disturbance, and is therefore classified as threatened or endangered in several U. S. states and in Sweden and Finland. It does not transplant well owing to its mycorrhizal dependence on specific soil fungi. The corms have been used as a food source by North American native peoples. The Thompson River Indians of British Columbia used it as a treatment for mild epilepsy.

At least near Banff, Alberta, the calypso orchid is pollinated by bumble bees (Bombus (Pyrobombus) and B. Psithyrus). It relies on "pollination by deception", as it attracts insects to anther-like yellow hairs at the entrance to the pouch and forked nectary-like structures at the end of the pouch but produces no nectar that would nourish them. Insects quickly learn not to revisit it. Avoiding such recognition may account for some of the small variation in the flower's appearance.

All content from Kiddle encyclopedia articles (including the article images and facts) can be freely used under Attribution-ShareAlike license, unless stated otherwise. Cite this article:
Calypso bulbosa Facts for Kids. Kiddle Encyclopedia.