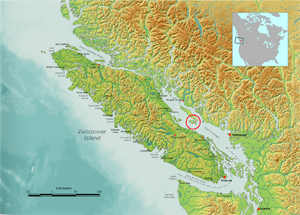 The first people to live on the island, before Europeans came, were the Nuu-chah-nulth, Salish, and Kwakiutl. As of 2009, over 700,000 people live here.

There are no bridges or tunnels between Vancouver Island and the mainland. There are ferries that carry people and cars to and from the island. One route crosses the Strait of Georgia to the Tsawwassen peninsula, from which there are roads that go to Vancouver and other cities in Canada as part of the Trans-Canada Highway. Another ferry route crosses the Strait of Juan de Fuca and reaches Anacortes in the U.S. state of Washington, from which roads go to Seattle and other cities along the West Coast.

There are many cities and towns on Vancouver Island. The biggest of these is Victoria, the capital of British Columbia, where the Legislative Assembly and the University of Victoria are found.

Other places on Vancouver Island where people live include:

All content from Kiddle encyclopedia articles (including the article images and facts) can be freely used under Attribution-ShareAlike license, unless stated otherwise. Cite this article:
Vancouver Island Facts for Kids. Kiddle Encyclopedia.