The Strait of Juan de Fuca (officially named Juan de Fuca Strait in Canada) is a body of water about 96 miles (83 nmi; 154 km) long that is the Salish Sea's outlet to the Pacific Ocean. The international boundary between Canada and the United States runs down the centre of the Strait.

It was named in 1787 by the maritime fur trader Charles William Barkley, captain of Imperial Eagle, for Juan de Fuca, the Greek navigator who sailed in a Spanish expedition in 1592 to seek the fabled Strait of Anián. Barkley was the first non-indigenous person to find the strait, unless Juan de Fuca's story was true. The strait was explored in detail between 1789 and 1791 by Manuel Quimper, José María Narváez, Juan Carrasco, Gonzalo López de Haro, and Francisco de Eliza.

The United States Geological Survey defines the Strait of Juan de Fuca as a channel. It extends east from the Pacific Ocean between Vancouver Island, British Columbia, and the Olympic Peninsula, Washington, to Haro Strait, San Juan Channel, Rosario Strait, and Puget Sound. The Pacific Ocean boundary is formed by a line between Cape Flattery and Tatoosh Island, Washington, and Carmanah Point (Vancouver Island), British Columbia. Its northern boundary follows the shoreline of Vancouver Island from Carmanah Point to Gonzales Point, then follows a continuous line east to Seabird Point (Discovery Island), British Columbia, Cattle Point (San Juan Island), Washington, Iceberg Point (Lopez Island), Point Colville (Lopez Island), and then to Rosario Head (Fidalgo Island). The eastern boundary runs south from Rosario Head across Deception Pass to Whidbey Island, then along the western coast of Whidbey Island to Point Partridge, then across Admiralty Inlet to Point Wilson (Quimper Peninsula). The northern coast of the Olympic Peninsula forms the southern boundary of the strait. In the eastern entrance to the Strait, the Race Rocks Archipelago is located in the high current zone halfway between Port Angeles, Washington, and Victoria, BC. 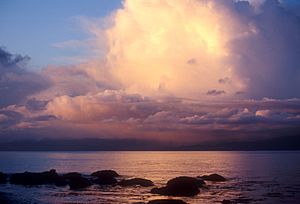 Sunset over the strait

Like the rest of the Salish Sea and surrounding regions, the climate of the Strait is disputed, with the Köppen system classifying it as Mediterranean, but most regional climatologists preferring oceanic. While the climate is mostly oceanic in nature, the dry summers result in the Mediterranean classification in the Köppen system. Rainfall ranges from over 100 inches (250 cm) (temperate rainforest) conditions at the west end to as little as 16 inches (410 mm) at the east end, near Sequim.

Because it is exposed to the generally westerly winds and waves of the Pacific, seas and weather in Juan de Fuca Strait are, on average, rougher than in the more protected waters inland, thereby resulting in a number of small-craft advisories, gale warnings, and storm warnings.

An international vehicle ferry crosses the Strait from Port Angeles, Washington to Victoria, British Columbia several times each day, as do passenger ferries of the Washington State Ferry system, a seasonal private ferry connecting Port Angeles with Victoria, and a private high-speed ferry between Victoria and Seattle. 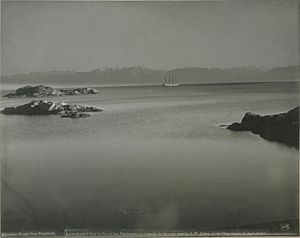 The Olympic Mountains of Washington as seen from the entrance to Esquimalt Harbour, 1900, photo: John Wallace Jones

This strait remains the subject of a maritime boundary dispute between Canada and the United States. The dispute is only over the seaward boundary extending 200 nautical miles (370 km) west from the mouth of the strait. The maritime boundary within the strait is not in dispute. Both governments have proposed a boundary based on the principle of equidistance, but with different basepoint selections, resulting in small differences in the line. Resolution of the issue should be simple, but has been hindered because it might influence other unresolved maritime boundary issues between Canada and the United States. In addition, the government of British Columbia has rejected both equidistant proposals, instead arguing that the Juan de Fuca submarine canyon is the appropriate "geomorphic and physiogeographic boundary". The proposed equidistant boundary currently marks the northern boundary of the Olympic Coast National Marine Sanctuary. British Columbia's position is based on the principle of natural prolongation which developed in international law. It poses a dilemma for the federal government of Canada. If Canada holds that the principle of natural prolongation applies to the Juan de Fuca Canyon on its Pacific Ocean coast, the assertion could undermine Canada's argument in the Gulf of Maine boundary dispute. In this Atlantic Ocean context, Canada favours an outcome based on the principle of equidistance.

In March 2008, the Chemainus First Nation proposed renaming the strait the "Salish Sea", an idea that reportedly met with approval by British Columbia's Aboriginal Relations Minister Mike de Jong, who pledged to put it before the B.C. cabinet for discussion. Making Salish Sea official required a formal application to the Geographical Names Board of Canada. A parallel American movement promoting the name had a different definition, combining of the Strait of Juan de Fuca and Puget Sound as well as the Strait of Georgia and related waters under the more general name Salish Sea. This latter definition was made official in 2009 by geographic boards of Canada and the United States.

In October 2009, the Washington State Board of Geographic Names approved the Salish Sea toponym, not to replace the names of the Strait of Georgia, Puget Sound, and Strait of Juan de Fuca, but instead as a collective term for all three. The British Columbia Geographical Names Office passed a resolution only recommending that the name be adopted by the Geographical Names Board of Canada, should its US counterpart approve the name-change. The United States Board on Geographic Names approved the name on November 12, 2009.

Counties along the Strait of Juan de Fuca:

Regional districts along the Strait of Juan de Fuca:

See also: List of Fishes of the Salish Sea

Certain groups of seabirds called common murre migrate north by swimming. Some Pacific Coast murres paddle north to the sheltered bays of the Strait of Juan de Fuca to feed on herring and other small fish.

Some scenes from the film The Hunt for Red October were filmed in the Strait of Juan de Fuca in 1989.

All content from Kiddle encyclopedia articles (including the article images and facts) can be freely used under Attribution-ShareAlike license, unless stated otherwise. Cite this article:
Strait of Juan de Fuca Facts for Kids. Kiddle Encyclopedia.