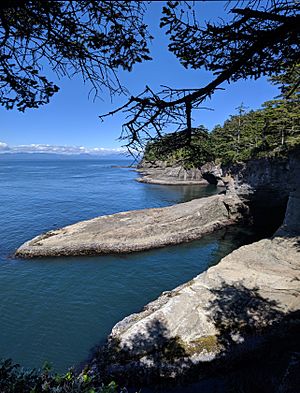 The view to the north from Cape Flattery, with Vancouver Island in the distance. 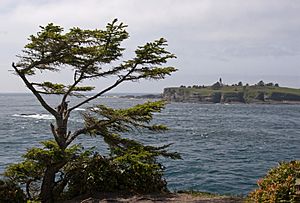 The Cape Flattery Lighthouse is on Tatoosh Island, just off the cape. Makah Bay and Neah Bay are on either side of the cape. Neah Bay, Washington is the closest town to the cape.

Cape Flattery is the oldest permanently named feature in Washington state, being described and named by James Cook on March 22, 1778. Cook wrote: "... there appeared to be a small opening which flattered us with the hopes of finding an harbour ... On this account I called the point of land to the north of it Cape Flattery."

In 1834, the first Japanese known to have arrived in what is now Washington state arrived in a dismasted, rudderless ship that ran aground near Cape Flattery. The three survivors of the broken ship were held as slaves by the local Makah people before being taken to Fort Vancouver by William H. McNeill under orders from John McLoughlin. 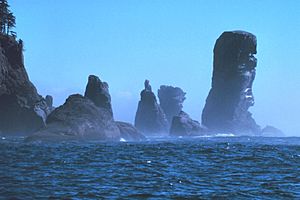 Fuca Pillar at Cape Flattery, the northwest extremity of the Olympic Peninsula

Fuca Pillar is a tall, almost rectangular, rock on the west side of Cape Flattery. It is named after Juan de Fuca, a Greek sailor who explored for Spain. Fuca has a doubtful claim to being the first European explorer to see the Fuca Pillar and to explore the Strait of Juan de Fuca, also named for him. The first generally accepted mention of the pillar was by John Meares in 1788.

All content from Kiddle encyclopedia articles (including the article images and facts) can be freely used under Attribution-ShareAlike license, unless stated otherwise. Cite this article:
Cape Flattery Facts for Kids. Kiddle Encyclopedia.