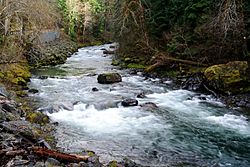 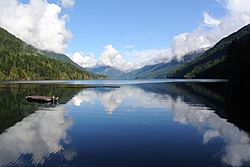 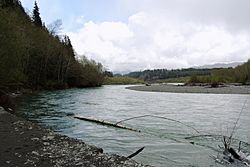 Clallam County is a county in the U.S. state of Washington. As of the 2010 census, the population was 71,404. The county seat and largest city is Port Angeles. The name is a Klallam word for "the strong people". The county was formed on April 26, 1854. Located on the Olympic Peninsula, it is south from the Strait of Juan de Fuca, which forms the Canada–US border, as British Columbia's Vancouver Island is across the strait. 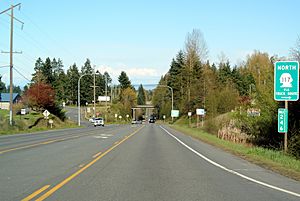 US Route 101 at the interchange with Washington State Route 117 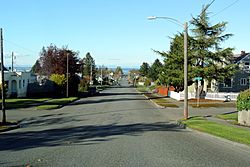 Crossroads in Port Angeles, Strait of Juan de Fuca and Vancouver Island in the background

The popular Twilight Saga novels and film series are set in Clallam County. The main storyline is set in Forks, however, the characters also visit neighboring Port Angeles.

All content from Kiddle encyclopedia articles (including the article images and facts) can be freely used under Attribution-ShareAlike license, unless stated otherwise. Cite this article:
Clallam County, Washington Facts for Kids. Kiddle Encyclopedia.